A Feature by Shauna Stanley

Three weeks from now, Ireland will have voted on whether to remove Article 40.3.3 (known as the Eighth Amendment) from the Constitution, which prohibits abortion in 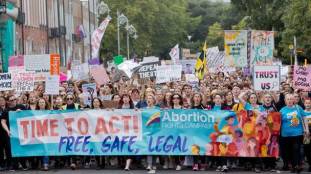 almost all circumstances, including in cases of rape, incest and fatal foetal abnormality. Some frame the Eighth Amendment as a provision which protects the life of the unborn child in the womb. Others frame it as a Constitutional ban which prohibits women from accessing various forms of reproductive healthcare in Ireland.

The upcoming referendum on 25 May will be the sixth instance Ireland has gone to the polls on the question of abortion. The first referendum, which inserted the above article into the Constitution, was passed on 7 September 1983, with 66.9% voting in favour and 33.1% voting against. Appetite for a referendum on the issue came about in January 1981 when the Pro-Life Amendment Campaign (PLAC), was established. The launch meeting of the campaign was called by John O’Reilly, a campaigner against contraception in the 1970s. The referendum was opposed by the Anti-Amendment Campaign, for which Mary Robinson was a spokesperson.

Between the initial insertion of the Eighth into the Constitution in 1983 and the current proposed removal, there have been four additional referenda pertaining to abortion – two which passed, and two which failed. In 1992 the Irish public voted on three amendments on the same day. The Thirteenth Amendment passed by a majority of 62.39%. It expressly states the Eighth Amendment ‘shall not limit freedom to travel between the State and another state.’ This means that women in Ireland can travel abroad to have an abortion if they wish. In addition, the Fourteenth Amendment was passed by a majority of 59.88%. It provides a limited right to distribute information of ‘services lawfully available in other states.’ This means anyone can provide women in Ireland with information on abortion clinics abroad, but there is a ban on providing information about procuring abortions in Ireland. The Twelfth Amendment held on the same day in 1992 asked whether to exclude the risk of suicide as grounds for legal abortion. This was rejected in 1992 by 65.35%. This referendum was effectively put to vote again in 2002 (as the Twenty-fifth Amendment) but was rejected by a margin of 50.42%.

The most immediate reason for the upcoming referendum, the Citizens’ Assembly, was made up of 99 randomly selected citizens and considered the case for and against having a referendum on the Eighth during seven months of deliberations chaired by former Supreme Court Judge Mary Laffoy. In April 2017 they recommended by majority that the government should hold a referendum to replace the Eighth Amendment with an enabling provision to allow for wider access to abortion in Ireland. The Bill tabling the referendum was passed through the government in March 2018, but the May referendum could be seen as the culmination of 35 years of campaigning and a line of high-profile cases transpiring from the Eighth Amendment.

After the death of Savita Halappanavar in 2012, a pro-choice group called the Abortion Rights Campaign began holding an annual March for Choice in Dublin. This grassroots campaign has been at the forefront pressuring for constitutional and legislative change with the 2017 March for Choice with a reported estimate turnout of 40,000 people. In addition, a number of solidarity gatherings were held abroad on the same day, including in Melbourne, Darwin, Perth and Sydney.

The Yes campaign is being led by Together for Yes, a group consisting of three organisations – the Coalition to Repeal the Eighth Amendment, National Women’s Council of Ireland, and the Abortion Rights Campaign. The Yes campaign argues that abortion should be treated as a private matter between a woman and her doctor. The campaign argues that this goal only be facilitated by the wider public’s support in overturning the Eighth. Their slogan, ‘Sometimes a Private Matter Needs Public Support,’ captures this sentiment. The Yes campaign is arguing for a compassionate healthcare system in Ireland where women are truly allowed to discuss their options with their doctor. Together for Yes also maintains that the referendum is about not only abortion, but prenatal healthcare options generally available to women in Ireland. If a medical problem develops during pregnancy, a doctor has to put the wellbeing of the foetus before the health and wellbeing of the pregnant woman, which may result in delays in healthcare and subsequent death – such as in the case of Savita Halappanavar.

The No campaign is being led by Save the Eighth, a group formed by the Pro-Life Campaign Ireland, which is an organisation that can trace its roots to PLAC from the ’80s.

The Pro-Life Campaign Ireland became active in response to the X Case, campaigning against the right to travel and the right to information. Save the Eighth maintain that ‘a vote for repeal is a vote for abortion on demand.’ From the No campaign’s perspective, removing the Eighth removes constitutional protection from the unborn, and legalising abortion infringes the right to life of the unborn. The Rally for Life has been held in Dublin annually since 2006, most recently in July 2017, with a reported estimate of 50,000 people in attendance.

Voting is not compulsory in Ireland as it is in Australia, so voter turnout will have a large part to play in the result. Historically, abortion referenda have been amongst the lowest turnouts in Ireland. For the 1983 referendum, only 53.67% of the electorate actually voted. It remains to be seen whether the referendum on 25 May will mark a departure from this trend.

In the event of a Yes vote, the Eighth Amendment, along with the Thirteenth and Fourteenth Amendments, would be together repealed and replaced by the following text:

Provision may be made by law for the regulation of termination of pregnancy.

Immediately after the referendum, the current law, the 2013 Act, would remain in place. This allows for abortion where the mother’s life is at risk, including suicide. If a woman or a doctor procures an abortion outside these parameters, they can receive a maximum 14-year prison sentence if convicted. The 2013 Act does not allow for abortion in any other circumstances such as rape, incest, fatal foetal abnormality, risk to health or economic reasons.

If the Eighth Amendment is repealed, it will allow the Irish government to legislate on abortion in these other circumstances. Fine Gael and Fianna Fáil, the major political parties in the Oireachtas (the Irish Parliament), are allowing members to take a free position on the issue, while Sinn Féin and Labour and other smaller parties are officially backing a Yes vote. The draft legislation proposed by Health Minister Simon Harris is based on the recommendations of the Citizens’ Assembly, and would allow abortion up to 12 weeks in all circumstances. Such abortions would be carried out by a medical practitioner who would first discuss the woman’s options with her. Then after a mandatory 72-hour waiting period the doctor would administer an abortion pill. The proposed legislation allows for abortion after 12 weeks only where the health or life of the mother is endangered, or in cases where the foetus has a condition where it will not survive outside of the womb or will die shortly after birth. Medical practitioners would be allowed to conscientiously object to providing an abortion.

Irish Abroad and the Referendum

Irish citizens abroad cannot vote in the upcoming referendum as is there no system of postal voting in Ireland for citizens abroad. This means there are a lot of Irish abroad who are feeling disenfranchised, particularly when postal voting is available to citizens of 120 other countries (including Australia).

Many Irish people abroad are going home to vote, similar to the #HomeToVote phenomenon that occurred during the 2015 Marriage Equality Referendum. Only those who are still on the register and have been away for less than 18 months are eligible to cast their vote after making the journey home. A Facebook page ‘Abroad for Yes’ has been set up to assist Irish students living abroad to come home for the referendum.

An Irish-Australian group Irish Pro Choice in Oz, based in Melbourne, has set up a campaign ‘Diaspora Downunder Dollars for Choice’, to encourage the Irish in Australia to host events and fundraisers to engage with the referendum. Events have been organised in Melbourne, Sydney, Darwin and Brisbane including a pub quiz, a gig and multiple film screenings to fundraise for Together for Yes and other pro-choice organisations which assist Irish women. No similar campaign group arguing for the preservation of the amendment has been formed in Australia.

Has the Eighth prevented abortion?

Statistics suggest 170,252 women travelled to the United Kingdom and the Netherlands between 1980 – 2016 to avail of abortion. This figure is a combination of the UK Department of Health’s report that a total of 168,705 women who availed of abortion in the UK reported an Irish address. In Ireland, the HSE’s Crisis Pregnancy Programme, which collects data on the number of women who gave Irish addresses at abortion clinics in the Netherlands, reported 1,547 Irish women travelled to the Netherlands for an abortion between 2005 – 2016. In Ireland, under the current 2013 Act, 77 legal abortions have been carried out due to the mother’s life being endangered, for the period 2014 – 2016.

These figures do not account for those who wish to end a pregnancy due to rape, incest, fatal foetal abnormality or economic reasons but cannot afford to travel, or cannot travel due to ill-health, domestic violence or because they are an asylum seeker. Abortion pills such as mifepristone and misoprostol are already in circulation in Ireland, and possession of these pills is not illegal. However any person caught taking mifepristone or misoprostol to terminate a pregnancy can receive up to 14 years in prison. Between 2010 – 2015, Women on Web reported that 5,650 women in Ireland requested abortion pills through their online medical advice service which distributes abortion pills around the world. In that same timeframe, 4,098 abortion pills were seized in Ireland by Revenue. This means the Eighth Amendment has not actually prevented abortion from happening in Ireland – rather, it appears to criminalise those who are not able to travel.

Undoubtedly, the Eighth Amendment has restricted women from accessing abortion services. Yet abortions still happen in Ireland, albeit in very restrictive circumstances. What would happen if Ireland votes No? The Eighth Amendment will continue to operate – and women who live in Ireland will continue to travel abroad or use abortion pills in Ireland illegally. This referendum is then about making such healthcare options legally and safely available to Irish women in their home country.

Shauna is a member of the Tinteán Collective, having completed a Law Degree at Trinity College Dublin before coming to Australia.