This is the first of a new series of articles on specific aspects of Irish migration to Australia that began with the Irish Orphans. Irish lawyers in Australia is a lesser known and researched aspect of Irish Australian studies. We begin with South Australia and former Adelaide lawyer Peter Moore’s response to the topic.

Irish Lawyers in Australia: Why study them? And how many were there anyway?

The study of the Irish in Australia usually concentrates on social groups and movements, and less often on vocational groups. Lawyers have received regular attention over the years but individuals usually evade recognition either as Irishmen or as lawyers. As long ago as 1985, Sir Gerard Brennan, former Chief Justice of the Australian High Court, felt compelled to characterise the Irish contribution to Australian law as ‘significant yet indefinable’. Seven years later, Professor Alex Castles, the founder of Australian academic legal history, thought that it ‘cannot really be quantified’.

Little changed until 2012 when Tony Earls set the game plan to follow in a Global Irish Studies Talk at UNSW. Tony conceded that much ‘has been written about the contribution of Irish lawyers to the development of colonial Australia’. But it had really only proven that ‘there were a lot of them and, as individuals, many of them achieved prominent positions and had historically significant careers.’

He was demonstrably correct. Moreover, the preponderance of effort favoured Irish barristers, partly because some of them held major public offices as senior crown law officers, Attorney-General and Solicitor-General (or their equivalents), and a few became Supreme Court judges. Less famous barristers were ignored, and solicitors were omitted almost entirely. Major monographs on Irish lawyers in Australia deal extensively with a famous few, not least Tony’s own biography of John Plunkett, Plunkett’s Legacy: An Irishman’s contribution to the Rule of Law in New South Wales (2009), and John Bennett’s Sir Frederick Darley: Sixth Chief Justice of New South Wales (2016). The same is true of many dozens of entries in the Australian Dictionary of Biography. Chronicling a notable minority rather than the rank and file denies us the chance to see what the whole group was like.

Tony also challenged some assumptions about Irish lawyers in the colonies. One, that they brought distinct characteristics to Australian legal culture, such as a particular wit and irreverence, Tony concluded was little more than ‘an application of an Irish stereotype’. ‘There were witty and irreverent English and Australian lawyers too,’ he said. The same went for suggestions that Irish lawyers brought a particular focus on land law reform, higher education, and religious tolerance. Here, too, Tony felt that Englishmen and Scotsmen, as well as colonially-trained practitioners, ‘were equally involved in such causes’.

Taking Tony’s advice to heart, I have examined every Irish lawyer and also all of their English and Scottish counterparts at work in three colonies from the inception of their English-style Supreme Courts: in New South Wales from 1824; in South Australia from 1837; and in New Zealand from 1842. So far, the focus is on the first generation, up to the end of 1861, when most colonial practitioners were immigrants to the colonies and arrived fully formed in the United Kingdom. This approach includes all practising barristers and solicitors who were born, trained and qualified in Ireland, England and Scotland, and who subsequently practised their profession in the three colonies. (It necessarily excludes ethnic Irishmen who trained in the colonies.) The study examines their social background, formation and legal practice (if any) at ‘home’, their reasons for emigrating, and their colonial legal careers. The goal is to understand the kind of Irishmen they were and, relative to their profession and its colonial practice, to assess the kind of lawyers they became.

How many Irish lawyers came to the colonies in the nineteenth century?

Before trying to understand their impact, we need to know the scale of their presence. The raw figures show that 69 Irish lawyers were admitted in the three colonial Supreme Courts between 1824 and 1861. Twenty-four of them (almost one-third) were barristers and 45 (almost two-thirds) solicitors, three of the latter in more than one colony. (This result omits seven men admitted in Sydney, six barristers and one attorney, who had qualified in England only. All were ethnically Irish, either by birth in Ireland or elsewhere to Irish parents. Irish and a lawyer, each is nevertheless an ‘English lawyer’ in terms of law, culture and practice.) The total admitted in the three jurisdictions was 471, of whom the Irish cohort comprised 14.65%.

Can you pick the Irishman?

Turning to the kind(s) of Irishmen they were, Tony Earls displayed images of colonial barristers in that 2012 presentation and asked his audience, ‘Can you pick the Irishman?’ Photographs of eight bewhiskered older gentlemen did not disclose an ‘Irish’ type. This exercise deftly highlighted that the Irishmen were not visibly distinct while it also affirmed that they were not professionally distinct either, once they were admitted into an English-style colonial legal system.

What about surnames? Twenty lawyers bore ‘O’ and ‘Mac’ surnames, although more than two-thirds of them did not use either prefix. More than twice as many, 49, had ethnically English and Scottish names. Such a high degree of assimilation to English cultural norms is consistent with the highly-anglicised nature of Irish law and its practice and procedure.

More particularly, five barristers had ‘O’ surnames, all without the prefix, compared with nineteen who did not, making barrister-surnames four times more linguistically English and Scottish than Gaelic. This confirms the well-accepted idea that the Irish bar at Dublin’s Kings Inns was an ‘Anglo-Irish’ enclave. 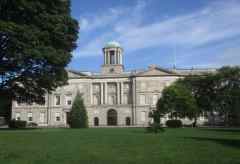 By contrast, half of solicitors were shown as Anglo-Irish. Fifteen solicitors bore ‘O’ and ‘Mac’ names compared with thirty with Anglo-Welsh and Ulster-Scot names—twice the linguistically English, Welsh and Scottish surnames than Irish ones. These findings appear to be consistent with the domestic state of Irish barristers and solicitors, indicating that Irish lawyers in Australia and New Zealand mirrored the social breakdown of the profession that remained in Ireland.

Photographs and surnames do not alone make Irish lawyers visible or audible. Nor do they proscribe social standing, political positions or religious adherence. More important was social class and its attendant brands of nationalism. Irish barristers tended to spring from a higher social echelon than solicitors. This was due in part to the expense involved in reading for call to the bar at the Kings Inns, including studying and usually graduating at Trinity College in the University of Dublin and keeping the compulsory nine terms at one of London’s Inns of Court. By comparison, the on-the-job training required for a solicitor’s admission was far less expensive. The Irish situation was complicated by the Penal Laws, which ordained that lawyers would be Protestants until the Catholic Relief Act 1793 allowed Catholics to return to the law. They quickly became solicitors in good numbers although the more exclusive Irish bar remained an Anglo-Irish enclave for generations even though Daniel O’Connell’s call in 1798 occurred at the first possible moment under the new dispensation.

Emigrant Irish lawyers spanned the same social range as the profession that stayed behind, from the upper trades to the lower gentry, indicating that no social level was immune to ‘taking the emigration’. Emigrant barristers continued to exhibit higher social caste than solicitors, and the Anglo-Irish dominated at the bar, although few belonged to the aristocracy or gentry. Robert Molesworth alone descended from peers – three of them, as it happened – although only as a great-grandson.

A few gentlemen (not always ‘well-mounted’, to use Jonah Barrington’s immortal phrase) and more professionals (clergy, defence-forces officers and lawyers) account for nearly half of the lawyers’ fathers. A good third of the paters engaged in commerce and the upper trades. ‘Trade’ varied according to wealth, of course. Galway-barrister Michael Burke’s brothers-in-law were third-generation brewers and bankers, the very rich Benjamin and Arthur Guinness. Hallmark of the Irish bar’s changing demographics, Peter Faucett, a Catholic called to the Irish bar in 1845, was a master blacksmith’s son just as Wolfe Tone’s father had been a master coach-builder.

After Daniel O’Connell was called the pace of change picked up in the emancipating 1820s and the reforming 1830s until a Catholic barrister, Michael O’Loghlen, was appointed Solicitor-General of Ireland in 1834 and as a judge at the Four Courts two years later. Australia was already ahead of the trend. By 1834, Roger Therry had been a New South Wales magistrate for four years, and went on to become a Supreme Court judge, and John Plunkett the Solicitor-General for two under the authority of the Catholic Emancipation Act Adoption Act that passed in Sydney in 1830.

Turning to solicitors, Alumni Dublinensis tells us that almost half of their fathers were pragmatici—solicitors. If anything, the social range of solicitors widened across the eighteenth and nineteenth centuries, both up and down the social scale. From Kilkenny commerce came John Devereux who had a share of work from his uncle Edward Smithwick, the great brewer, while Daniel O’Brien from Clonmel was a shopkeeper’s son who benefitted from O’Connellite local government reforms to become the town council’s solicitor. These examples illustrate the further point that lawyers practised all over the Irish island, especially as solicitors. A few barristers decentralised, although most tended to congregate in Dublin at King’s Inns and around the Four Courts.

Irish lawyers in colonial Australia and New Zealand did not constitute a large group relative to the entire legal profession in any colony, and reflected the social character and geographical spread of the profession at ‘home’. But how did they get on in the colonies? And did they make a difference either as Irishmen or as lawyers? Questions for another day.

Peter Moore is a former Adelaide lawyer. Over 40 years he has developed autobiographical profiles of every lawyer admitted in South Australia from 1837 to 1945, and in New South Wales and New Zealand up to 1861. Currently, he is building a Dictionary of Biography of NSW Lawyers to 1861, supported by the Sir Frances Forbes Society for Australian Legal History.

*The term lawyer is a generic word for a solicitor or a barrister. Usually a solicitor works from an office and a barrister represents clients in court but there are exceptions.

One thought on “The Irish and Australian Law”