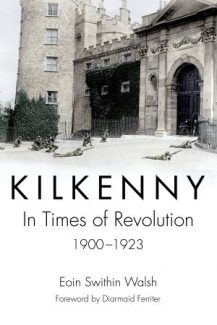 On one level, county Kilkenny would be the least likely county outside of Dublin to form a useful study of Ireland’s struggle for independence between 1900 and 1923. Life was easier there. Unemployment was low. Kilkenny’s soil was rich. The Land Acts from the end of the nineteenth century saw the successful transfer of land from largely absentee landlords to tenant farmers. The introduction of creameries led to new industries and more varied employment opportunities along with new opportunities for local leadership and community development. Kilkenny in Times of Revolution 1900 – 1923’s author Eoin Swithin Walsh point out that

The creamery manager…[became] a significant figure in the community, coming close in a social hierarchy to the priests, RIC Sergeant, and national school teacher.(p. 3)

On another level, these aspects of the county also helped in the necessarily quick response to the changing political landscape. The Kilkenny people had become exposed to politics during those Land League years and had seen the direct result of such involvement. Often it was their offspring who were on the ground, ready and willing to step up to become involved in the social and political revolutionary movement of the times.

Swithin Walsh shows the rising Kilkenny middle class involved in the Gaelic Revival’s focus on language, literature, theatre, and sport. He points out that although cricket was the most popular sport in Kilkenny at the end of the nineteenth century, the small town of Callan around about the same time hosted the first Gaelic football game. Sport and politics were plainly linked, according to the author, when during Kilkenny’s first All-Ireland hurling match in Tipperary political pamphlets from a new group called Sinn Féin were distributed. The author provides an intriguing insight into the obstacle the Sinn Féin name carried with many of the hurling fans at that time pronouncing it as Sin Feen’.

Kilkenny in Times of Revolution 1900 – 1923 is replete with this kind of anecdote and observation. Its Introduction makes clear that the perceived readership would go beyond the expected ‘history buffs’. The book lives up to its promise for ‘concise descriptions’. It adopts a personal approach in outlining the involvement of Kilkenny men and women in the War of Independence and the Civil War. Previous to these was the 1916 Rising with some big names from that time shown to have Kilkenny connections: Francis Sheehy-Skeffington and Thomas MacDonagh had both taught in St. Kieran’s College in Kilkenny city. Local priest Father James Crotty while taking care of the spiritual needs of World War 1 Irish soldiers in the British army interned by the Germans in Limburg met with Joseph Plunkett and Roger Casement, although he disapproved of Casement’s idea for an ‘Irish Brigade’ made up of recruits from the imprisoned Irish. Lesser known were Paddy Bealin who was working in Dublin in 1916 and who was executed for some unknown reason, and Richard Healy, also working in Dublin but a member of the Irish Volunteers who fought in the Rising under Thomas MacDonagh. The book offers other Kilkenny related vignettes such as George Smithwick of the brewing family who happened to be in Dublin on Easter Monday in a taxi cab in St. Stephens’s Green that came under crossfire that wounded his female companion.

Historians will be pleased with the level of detail in this book gleaned from the now available Bureau of Military History Witness Statements from the 1940s and 1950s, the Military Service Pensions Collection, and newly released British files such as martial law records from January – July 1921. Again, what could have been dry recitations of facts and figures are diversified by Kilkenny specific items such as the election of the imprisoned Peter DeLoughrey as mayor of Kilkenny in January 1919.  DeLoughrey later received a congratulatory ‘cake’ from ‘a few Kilkenny exiles’ at Lincoln prison that contained items he used to make a master key that effected the escape of De Valera and two others from the jail to the waiting Michael Collins and Harry Boland.

War, though, is mostly awful and sad. The book covers the Civil War and its aftermath with the saddest accounts the executions of Irishmen by Irishmen who had once fought on the same side. Sad too are the accounts of the orphaned and the widowed. As in other counties, no doubt, many Kilkenny widows who lost husbands in the Boer War or World War 1 lost elder sons too in Ireland’s War of Independence and Civil War.

Eoin Swithin Walsh provides a template for studying county by county responses to the Irish fight for freedom and independence in the first decades of the twentieth century. More studies such as Kilkenny in Times of Revolution 1900 – 1923 will also afford opportunities for comparisons and greater insight and appreciation of the complexities of small nation revolutionary wars.

Dymphna Lonergan is a member of the Tintean editorial team