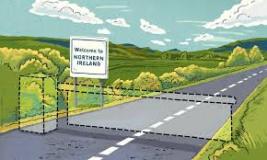 The writing and publication of Darach MacDonald’s latest book Hard Border – Walking through a century of Irish Partition could hardly have been better timed. It is part memoir, part travelogue and largely a history of the border which was created between the Irish Free State/Republic of Ireland and Northern Ireland in the early 1920s. The book also now serves as a warning of what might come again as a result of Brexit.

Prior to the 1920s, there were no borders dividing Ireland but partition created one, dividing the ancient province of Ulster itself into two parts. Darach MacDonald grew up in one of the towns  – Clones, in Co. Monaghan – that now found itself on a frontier.

Originally the new border was relatively soft but was soon hardened as a result of customs posts being established along both sides of the border to collect revenue for the two entities.

Because of the 1998 Peace Agreement and the fact that both the Irish Republic and the United Kingdom were now both members of the European Community, the hard border faded away. It now threatens to return.

No part of Ireland wants a hard border to return for obvious economic reasons. The British government has so far failed to come up with a plan to resolve this issue, although it claims to have to agreed to a ‘backstop’ [or fall back] plan to protect Irish interests in the event that the UK leaves the EU without a fully negotiated agreement.

However what this might look like and how it would work is still not clear. There is no government in Stormont. The Democratic Unionist Party [DUP] is in a strong position of influence in London, having given Teresa May the numbers she needed to form a Government after her disastrous showing in June 2017 where she lost her majority.

One solution to the problem would be a special status for Northern Ireland, such that it effectively remained in the EU’s economic union. This would avoid a hard border with the Republic but equally the DUP has ruled out any outcome that places Northern Ireland in any lesser or different relationship with the rest of the UK (and has the political clout in London to ensure this). Equally, the British Government has ruled out any de facto customs or other border running down the Irish Sea.

There has been some discussion as to whether Brexit offers the opportunity to look again at the possibilities of a United Ireland. Some modifications of positions may be emerging. The DUP’s leader Arlene Foster, who was born in Fermanagh, a border county, recently made the news by travelling to Clones to attend the final of the Ulster GAA football final. Newspaper reports said that she was well received by the locals (but her team lost]). 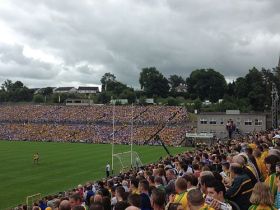 The final of the Ulster Senior Football Championship is usually held in Clones.

The GAA, formed as an expression of Irish nationalism, plays an Ulster-wide competition that includes all the counties of the ancient province of Ulster, and the final is normally played at St Tiernach’s Park, outside Clones, less than two kilometres from the border. It was the first time that a Unionist leader had attended an Ulster GAA final.

A full review of Darach MacDonald, Hard Border – Walking through a Century of Irish Partition, New Island, Dublin,(2018, 383) pages. will be published in August.

Keith Harvey  is a frequent contributor to Tinteán. He worked for the Federated Clerks Union during the 1980s and early 1990s and has written a short account of the life and times of John Maynes, former national President of the FCU (Labor History No 97, November 2009).