Last month we published a review of the first keynote speaker, Professor David Fitzpatrick, at the Australasian Irish Studies Conference held in Adelaide from November 29-December 2, hosted by Flinders University and supported by the Irish Embassy. This month we continue that reporting.

Re-remembering 1916 and its aftermath: Áine Ceannt, the Irish White Cross, Voluntary Action and ‘Children of the Nation’.

Professor Melanie Oppenheimer is one of Australia’s leading historians of women, war, and volunteering. She chose as her keynote theme the little-known post-Rising volunteer group in Ireland, The Children’s Relief Fund, later named The White Cross, headed by Áine Ceannt, the widow of the executed Rising leader, Eamonn Ceannt.

Professor Oppenheimer was pleased to find this previously unknown (to her) volunteer group, especially as she has written the history of The Australian Red Cross.

Following the Rising at Easter in 1916, many families were left without their breadwinner either through death, imprisonment or disability. Because of the bigger focus on humanitarian concerns from World War I, it was difficult to gain worldwide attention for Irish orphaned or otherwise disadvantaged children from the Rising and subsequent Anglo and Civil wars. The aim of The Children’s Relief Fund was to relieve hardship, assist with building reconstruction, and to support breadwinners in prison.

Professor Oppenheimer explained that following Eamon De Valera’s visit to the US in 1920, most monetary relief came from the American Committee, President Hartley, and Vice President Calvin Coolridge. Over a million pounds was raised on St Patrick’s Day 1921. The British government objected to what it considered to be interference in domestic matters by the US. There was also concern that funds would be re-directed to Sinn Fein activities. In all events, the funds were used to cover the disadvantaged Irish children’s basic needs documented as: 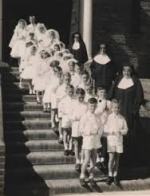 Outfitting for the child’s First Holy Communion was also paid for, as were school fees to encourage children to stay in school longer than the permitted leaving age of 14. A lump sum was paid at aged 21 to girls in the form of saving certificates and for boys to start up a business or trade.

Áine Ceannt (formerly Frances O Brennan ) with son Rónán who was only ten when his father was executed in 1916.

Aid was not confined to Dublin children, Professor Oppenheimer explained. Áine Ceannt, as President, travelled to the thirty-two counties identifying needs and  refusing to recognise partition. Finally, The Irish White Cross was disbanded in 1947 when most children who had been affected by the Rising and subsequent Anglo and Civil wars had attained their majority. Professor Oppenheimer is continuing her research into The Irish White Cross membership. During her research for the conference keynote addresss she found two Australian connections: Miss May Maloney, Clare Hotel, George Street, Sydney, and Rev Dr Patrick Tuomey, 532 New Canterbury Road, Dulwich Hill, Sydney.

Imposture and Replay: Joseph Plunkett and Strindberg’s Easter in Dublin, 1916

Dr Ivanova teaches European, American, and East Asian Drama at Flinders University.  Earlier on in her career she was an Irish postcolonial scholar, researching cultural nationalism in modern Irish drama and theatre between the 1890s and 1920s.

She was delighted, therefore, to return to Irish studies for this keynote address and chose as her topic the first staging in the English language of August Strindberg’s play Easter, a few months before the Rising on Easter Monday 1916. 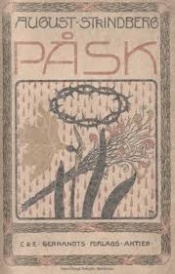 She began by explaining how the newly established Abbey Theatre was thought by some to be too much focused on so-called ‘peasant plays’ and the need for Ireland to look to Europe in developing a modern Irish culture. Two who shared this thinking, Joseph Mary Plunkett and Thomas MacDonagh, were executed following the Rising. They were joined by the non-political theatre manager, Edward Martyn, who, in a letter to Dublin’s Evening Herald newspaper in April 1913 claimed the overuse of the peasant play to be ‘very tiresome’ and expressed the need for such plays to be balanced with Continental drama. Martyn, in particular, wished to promote the Scandinavian drama popular at the time, especially plays by August Strindberg and Henrik Ibsen.

In 1914, The Irish Theatre was formed by Thomas MacDonagh, J0seph Plunkett, and Edward Martyn to produce plays in the Irish language, plays by Irish authors (other than peasant plays) and foreign plays translated into English. Joseph Mary Plunkett’s mother owned the Hardwick Street Hall that became home for The Irish Theatre. Plunkett, however, withdrew from the project in a dispute over the staging of Strindberg’s Easter, finding it profane.

Dr Ivanova at this point invited consideration of what in the play Plunkett might have found to be profane and why he allowed the theatre group to continue using his mother’s building at a peppercorn rent.  She also speculated on whether the play might have been a camouflage for plans for the 1916 Easter rebellion or whether it was a coincidence that a play called Easter ( that had resemblances to W B Yeats’ nationalistic drama Kathleen Ni Houlihan ) was staged one month before the Easter Monday Rising. Dr Ivanova’s address allowed us to consider other aspects in the lives of people such as Thomas MacDonagh and Joseph Mary Plunkett that are often overlooked because of their dramatic and untimely deaths during Easter 1916.

(Scroll down for further information about The Conference Dinner and Future Conferences.)

Frances Carter’s topic was a new diaspora: the Irish in Dubai

Rory Hope told the story of his ancestor John Hope, from Maghera, County Derry, one of South Australia’s early settlers, arriving in 1839

Andrew Scott’s paper considered ‘the political and ethnic importance’ of music and song in transmitting ‘historical knowledge of 1916’. Here he plays the iconic Easter tune ‘The Foggy Dew’.

The conference organisers’ research areas include promoting the Irish contribution to the development of South Australia. A bus tour on the day preceding the conference of ‘Irish Adelaide’ gave a general overview of such contributors as George Strickland Kingston ‘the first European to set foot in Adelaide’, John Jeffries, the first judge, and Robert Torrens whose name is given to the river that runs through Adelaide. It was fitting, therefore, that the conference dinner was held in Ayers House designed by Corkman George Kingston.

We were honoured to have the presence of the new Irish ambassador to Australia and his wife and thrilled that he showed true Irish colours by singing on the night the bilingual Preab san Ól following a ‘Nobel Call’ by two Dublin ‘lassies from Kimmage’. This encouraged subsequent Australian and New Zealand voices to share a song to the astonishment (and delight) of the serving staff, no doubt used to more formal occasions. 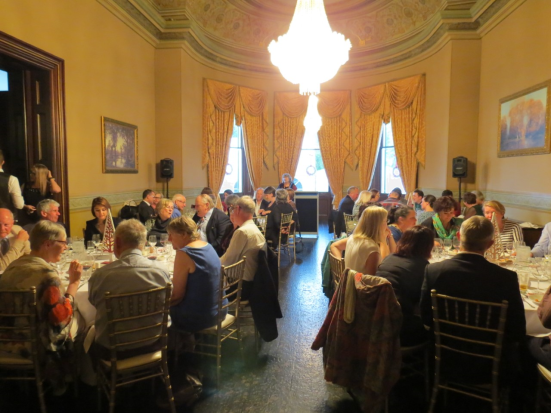 Watch out for information on the 23rd Australasaian Irish Studies conference. In the meantime, you might be interested in the inaugural Irish Global Diaspora Congress planned for August in University College, Dublin. This is an initiative of world archaelogists and anthropologists. Professor Heather Burke from Flinders University, Adelaide and Professor Malcolm Campbell from The Universty of Auckland are on the organising group. The congress is, however, multi-disciplinary as is evidenced by the promotion (below)

This is the inaugural congress in a triennial series that examines the histories, cultures, heritages and identities of Irish communities beyond Ireland’s shores.

More than 70 million people worldwide can claim descent from Irish emigrants. For many decades there has been considerable scholarly interest in the history of emigration from Ireland, from its beginnings in the middle ages (to Britain and parts of Europe) through the eighteenth and nineteenth centuries (to all corners of the globe), and in how ‘Irishness’ has been and continues to be maintained and expressed by descendant communities. However, the sheer scale of the Irish diaspora has created obstacles to an international conversation and exchange of ideas. Comparative perspectives will greatly enhance our worldwide research on subjects such as the many causes of Irish migration, the types of people who migrated, the shared or divergent experiences of the migrants in different places and times, the material remains of diaspora, the impact of migrations on host populations and cultures, and relationships between diasporic communities and Ireland.

This congress provides a stage for this long-needed, international exchange and discussion. Researchers from many fields and from every corner of the world are invited to Dublin to attend four days of plenaries and parallel sessions, where they can present their work, meet fellow-researchers, exchange ideas, and establish research networks within and across disciplinary boundaries.

Proposals are invited for Research Papers, Sessions, and/or Posters.

Contributions may be of an empirical nature, or may address such themes as migration, transnationalism, colonialism, postcolonialism, and all perspectives from all disciplines are welcome. There are no restrictions on subject-content as we explore creating new disciplinary alliances and intellectual synergies in the field of Irish diaspora research.

The Early Bird conference registration fee (until March 31, 2017) for four days is 200 Euros, and 100 Euros for students, and can be paid online, starting in October. Accommodation will be available on campus for those who wish to stay in UCD for the duration of the congress, and further details will be posted on the conference web site.

To submit a proposal, please fill in the form available at http://www.diaspora.illinois.edu/IrishDiaspora/GlobalIrishDiasporaCFP.doc

Your proposal will be considered within five days of submission. Please note that you will have an opportunity to fine-tune your title and abstract before it is published on the congress web-site, so a provisional title and abstract can be submitted, provided they remain close to the final version. Please send your completed form and any questions or comments via email to Globalirishdiaspora2017@ucd.ie.

Dymphna is a Lecturer at Flinders University and is a member of the Tinteán editorial collective.