Last year, my friend Brigid and I were widowed. Brigid was missing her sister’s family in Corcomore, County Limerick and I was still coming to terms with the emptiness of my home. When she asked me to accompany her to Ireland, I was unsure at first, but in the end, I was fortunate that Brigid had such welcoming friends and relatives. Their warmth, the softness of the light, the gentle green of the Irish landscape and the benign climate of an early summer were such comforts, and we laughed and had so much fun. After a couple of days relaxing with her sister’s family at Corcamore and seeing more stone bridges and ruined castles than I thought possible in such a small area and space of time, Brigid and I hired a car and took the N85 towards Galway and ‘the Wild Atlantic Way’ .We diverted to Spanish Point for our first view of the sea.

Only the green in the rest of Ireland is more extravagant than the rocky terrain of limestone, granite, and slate in County Clare. It was hard to find soil among the rock and bog. I think the stone walls in Ireland must stretch to the moon and back and still there are more. No hedges along the road in this country. The roads here are lined with rock walls and every field is cut with stone fences to corral a dozen sheep. The drained fields, by contrast are velvety green, nestling in the landscape.

At the Cliffs of Moher the sea was glassy, the horizon smeared in mist. King John’s castle loomed eerily on the edge of a distant cliff. The earth and sky became one, mystical, legendary and poetic. The cliffs are so sheer they induce vertigo and some foolish tourists hang their legs out over the edge. The Atlantic Ocean here is famous for its surf swells, but the board riders would need a boat to get to the swells, as the cliffs make no beach. They are a black colour but can also be chocolate brown to russet depending on the rock exposed. The Visitor Centre and Souvenir shops are discreetly built into the side of a hill. From one side they are not visible at all. 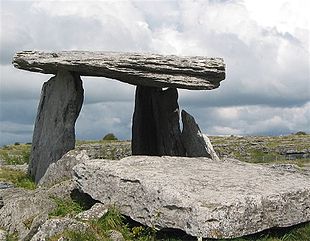 Dolmen at Poulnabrone, the Burren

From the Cliffs we headed inland again and reached the Burren, a National Park with an extraordinary landscape of bare limestone eroded into large flagstones with mini ecosystems in the crevices. It is unique. I have never seen the like. There is a dolmen, a massive three stone marker from the Neolithic period, not uncommon in western Europe, but a reminder of Ireland’s’s ancient history.

With plenty of light remaining we continued towards Galway and on to Headford where Brigid’s relatives, Maeve and John, live. We got lost following the directions from some locals who insisted that the signed way was not the best way. We turned around after several kilometres of ‘the best way’ we looked desperately for somewhere else for help.

The only other place open in Headford was the pub. Inside it was warm and crowded and everyone was turned towards a TV screen. I interrupted the boozy crowd. A couple of the men turned around, reluctant to take their eyes from the game. ‘Follow the signs’ was the consensus. With this sound advice, we found the pretty looking doll-like house built at the height of the Irish boom where Maeve and John lived. Their garden was typical of the region, brightly coloured potted plants on gravel, the antidote to mud or spongy lawn full of moss. They were trying to sell but had been caught in the rapid devaluation of property following the global recession. Their lovely looking home seemed at the same time to have been hastily put together. Upstairs the floor felt like the plywood that lines the back of a bookshelf. There were gaps between skirting boards and architraves. They had to incur the cost of bringing the house up to EU building standards, and this had become a bureaucratic dilemma. One of the requirements was a radon gas detector. Radon gas is a carcinogenic, nuclear gas released by dissolving limestone. Colourless and odourless, it is widespread in Ireland. There were also plumbing issues and septic tank requirements that can be expensive to resolve in a rain sodden country. It was not the first evidence we saw of the economic scabs of the recession. Many villages had empty or incomplete builds on their outskirts.

‘There’s a bath upstairs, Mary, next to your room,’ Maeve said.

‘That sounds lovely,’ I replied thinking of my aching body.

‘Well in that case I will run up and turn up the gas so you have enough hot water. It’ll be ready in an hour. You’ll have to turn it off again when you finish.’

I felt embarrassed to have caused her extra bother. ‘It’s the immersion system’, Brigid assured me, as sometime later Maeve flew up the stairs. The science of immersion plumbing escapes me and I had forgotten to turn it off.

After two nights of hospitality we made our way to Galway city along the majestic glacial sweep of Lough Corrib. We had a morning stop at Corrnamona, and from the nearby church we heard children singing. We stepped inside to see a small group of children preparing for their Confirmation, in Irish, with coaching from their teacher. It was one of those random delights that become internalised for the rest of your life.

We made Limerick our home base and for the remainder of our stay we cris-crossed the country to visit various friends and relatives. We hiked near Sneem on the Ring of Kerry and at Glendalough, the streams running fast and fresh after a record winter rainfall. At Roscommon, I walked on the mushy peat and wondered at how this valuable, life-giving resource has made life richer for generations of Ireland’s poor. It is, however a finite resource and mechanical stripping is a threat to its ongoing generosity.

I was surprised and charmed when a walk in a temperate rain forest near Ballyvourney, Co. Cork led us to St Gobnait’s Well and stories of magic and superstition. There were the remains of an Iron Age hut, two churches, one dating from the fourteenth century and an ongoing devotional walk for pilgrims.

It also has a well, a traditional place of veneration, although it is now no longer operational. It was a reminder of the diverse cultural continuum, Viking,Celtic and Norman that has led to Catholicism through an immensely rich interpretation of Christianity. I felt proud to link my spirituality to this tradition and proud to know my ancestors were Bog Irish.

One thought on “Proud to be Bog Irish”