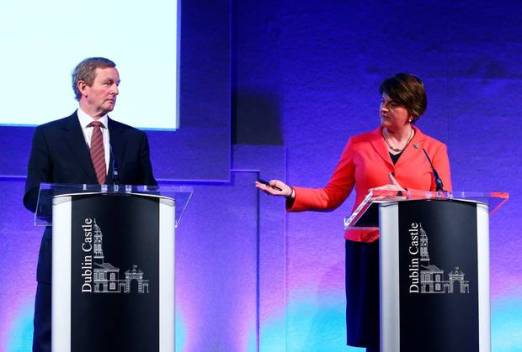 Enda Kenny and Arlene Foster at the NSMC Meeting in July.

Collateral damage from the fallout surrounding Brexit is not hard to find. It includes renewed rumblings about another Scottish referendum on Scottish independence from the UK; how the Border between the Republic of Ireland and Northern Ireland is to be managed; an expected downturn in the British and Irish economies; divisiveness  and an increase in factional discontent in the major political parties in Britain, to mention but a few.

One of the few collateral benefits for Ireland is the realization that this divisiveness just might advance the cause of the reunification of Ireland. This startling and radical notion was raised by the Taoiseach, Enda Kenny, at a regular monthly meeting of the North South Ministerial Council (NSMC) between the leaders of the two territories, the Republic and NI.

The North South Ministerial Council (NSMC) was established under the Belfast/Good Friday Agreement (1998), to develop consultation, co-operation and action within the island of Ireland. In each of the six Areas of Co-operation, Transport, Education, Health, Agriculture, Environment and Tourism (including Tourism Ireland) common policies and approaches are agreed in the North South Ministerial Council but implemented separately in each jurisdiction.

At the monthly meeting  held earlier this month in Dublin, between the Taoiseach and the Northern Ireland First Secretary Ms Arlene Foster, a proposal put forward by Mr Kenny, to initiate a cross-border Forum on the implications of Brexit for both the Republic and NI, (including the potentially divisive issue of security on the Border between the two countries), was decisively rebuffed by Ms Foster.

Ms Foster indicated that she considered that any problems, which arose from the implementation of Brexit, could be dealt with by the administration and protocols already in place under the NSMC. She said:

there were already ‘more than enough’ bodies and mechanisms through which the Northern and Dublin governments could co-operate. While firmly rejecting the proposal, she was keen to emphasise co-operation between the two administrations. (IT 29/07/2016)

She pointed out that there was no need for further ‘mechanisms’:

because we can lift the phone to each other. We may not agree on small things like mechanisms – we do agree on the need to work together to make the best for our people.

However Mr Kenny’s proposal took on a life of its own. Delivering the annual John Hume lecture at the MacGill Summer School in Glenties, Co Donegal, on the 17th July 2016, the Fianna Fáil leader, Micheál Martin, endorsed the proposal of a North-South forum:

such a forum would be an ‘opportunity to reach out to excluded groups, to show that a broader range of interests than those articulated by the dominant political parties can be heard.’

the Government should lead a ‘civil dialogue’ with stakeholder groups from North and South, including farmers, business organisations and civil society groups.

Mr Kenny took up the theme in his keynote address at the MacGill Summer School on the 18th July, and suggested a broader base for the existence of such a Forum. He pointed out that 56% of the voters in NI (from every social and political group, regardless of the usual rusted on political allegiances) voted to ‘Remain’ in the EU. The wishes of the majority of the population of NI should not be ignored. He further suggested that a possible solution for this situation would be for NI to leave the UK, be reunified with the Republic and thus remain in the EU. (This course of action would have the added advantage of solving the thorny issue of Border control between NI and the Republic!)

If that possibility were to happen, you would have Northern Ireland wishing to leave the United Kingdom, ——- and joining the Republic which will be a member of the EU.

There are already provisions in place for such a move in a little known clause in the Belfast/Good Friday Agreement – Article 2, Annex A which states that the Northern Ireland First Secretary could trigger a poll to decide the issue:

If at any time it appears likely that a majority of those voting would express a wish that Northern Ireland should cease to be part of the UK and form part of a united Ireland.

However Mr Kenny did not envisage such a poll being called anytime soon. Nevertheless he did consider that these issues raised by Brexit for both the people of NI and the Republic, warranted a specialised forum to discuss further implications.

The Remain vote may show people the need to rethink current arrangements. I hope it moves us towards majority support for unification and if it does we should trigger a reunification referendum.

Both the SDLP and Sinn Fein  backed the Remain campaign and the leaders of Sinn Féin, Gerry Adams and the 2nd Secretary of NI Martin McGuinness are campaigning very strongly for a referendum in NI on whether or not Northern Ireland should exit the UK and be reunified with the Republic. Speaking to RTE, Mr McGuinness said the British government has:

a ‘democratic imperative’ to call a referendum on whether Northern Ireland should leave the United Kingdom and unite with the Irish Republic.

Of course not everyone agrees that such a referendum is either possible or desirable. Economists of every political persuasion have pointed out the NI is supported by Britain to the tune of many billions of pounds a year and pays the salaries of most of Northern Ireland’s civil service. Assimilating NI into the Irish economy would:

There is also the problem of the Unionist faction in the North for whom reunification with the Republic is anathema. Although much of the vitriol and rancour of ‘The Troubles’ has noticeably diminished, even holding a referendum on the issue without an outbreak of hostilities from the significant minority of the DUP seems an unlikely scenario.

The issue of Border control rumbles on with both the NI Secretary, James Brokenshire and the PM, Theresa May, at pains to reassure the Republic that there will be no return to a ‘hard border’.

‘Nobody wants a return to the borders of the past,’ Ms May said. What we do want to do is to find a way through this …. a deal which is in the best interests of the whole of the UK’.

Both Ms May and Mr Brokenshire pointed out that the Common Travel Area between the UK and the Republic of Ireland has existed since the Anglo-Irish Treaty of 1921, allowing freedom of movement between the two countries.

As it currently stands, Ireland has an agreement known as the Common Travel Area with the UK, which has been in operation since the 1920s. This allows us to move freely between the two countries.

This means that there are no passport controls in operation for Irish and UK citizens travelling between the two countries, and you do not need to have a passport in order to enter the other country. (Newstalk).

The CTA although not legislated for, is protected by Protocol 20 of the EU Treaty, which says that the UK and Ireland:

Of course such discussions of the possibility of reunification look like pipe dreams, given the economic, political and social realities of a Brexit world. Yet, it seems a small beacon for reunification has been lit in an otherwise impervious and intractable political landscape. In the interest of future generations, and/or the possibility that perhaps things could be otherwise, a cross- border Forum might not be a bad idea. As Enda Kenny observes:

Elizabeth McKenzie
Liz is a member of the Tinteán Editorial Team.

One thought on “Reunification – a collateral benefit of Brexit?”