Where: Buckleys of Dunnolly Victoria

Further information: John Clancy at ovens.town@hotmail.com;  or phone:Rachel Buckley on 54681858.

WB Yeats 150th Anniversary Commemoration to be held in Dunnolly.

As many of ‘Tinteán‘ readers are aware,  this year marks the 150th anniversary of the birth of William Butler Yeats, generally regarded as Ireland’s greatest poet, and indeed as one of the most renowned poets of the 20th century.

In order to commemorate his birth,  the Central Victorian Irish Assocation,  in conjunction with Buckleys of Dunnolly,  is to present a Yeats commemorative event.  This will take place on Saturday  17th October at 2.30 pm at Buckleys of Dunnolly.  Buckleys of Dunnolly is an old hotel which was built during the gold rush days of the 1850s.  It has recently been lovingly and beautifully restored by multi talented, Rachel Buckley, formerly of Melbourne.

The aim of the event is to recreate the atmosphere of Coole Park House,  County Galway,  the home of the famous Gregory Family. Lady Augusta Gregory was a renowned playwright in her own right, was one of the co-founders with Yeats and Edward Martyn of the Abbey Theatre in Dublin, and in many respects the patroness of WB Yeats.

The W B Yeats event, ( ‘the concert,’)   will consist of a short ten minute introductory talk on Yeats by John Clancy.  This will be followed by a lovely program which will feature some of Yeats’ poetry,   some songs set by various composers to poems by Yeats,  some piano and harp interludes, and finally by the reading of the short fifteen minute play  ‘Cathleen Ni Houlihan‘ by a team of actors from Bendigo.  This play is set in Killala (County Mayo) just before the French fleet arrived there in 1798.  The concert is being produced by Bendigo based impresario John Clancy.

In order to re-create the atmosphere of Coole Park House,  the concert will take place in the recital room of Buckleys of Dunnolly, which hosts a beautiful grand piano.  Lady Gregory (Rachel Buckley) will welcome the august gathering.  Before the concert,  the audience (guests) will be treated to sherries served by the Gregory family butler,  and after the concert, they will be served a delicious afternoon tea prepared by the ‘downstairs  staff” of Coole Park House. All in all, this will be a memorable concert and a delightful afternoon. A tour of Buckleys of Dunnolly may also be included.

The cost of attending this Yeats event will be $20, which will include pre concert sherries and afternoon tea.  An absolute bargain!   Would be audience are advised, however, to book their places as soon as possible.  Buckleys of Dunnolly recital room holds only about 35 people, so bookings are essential.

Treat yourself to a truly memorable afternoon in a unique setting. 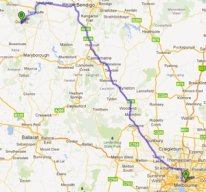 Further information can be obtained by contacting John Clancy by email on  ovens.town@hotmail.com