The Irish President, Michael Higgins, has visited the Turkey and the Gallipoli peninsula to take part in the commemorations marking the 100th anniversary of the Allies’ ill-fated campaign to knock the Ottoman Empire out of the First World War. Tens of thousands of Irish soldiers took part in that campaign – either as members of the British Army or as Irish born ANZACs and thousands died and are buried there. (see Tinteán 06/04/2015)

Irish troops landed on the Gallipoli peninsula on April 25th 1915, not at ANZAC Cove which is the focus of Australian commemorations, but at Cape Hellas as part of a British and French invasion force. Irish troops later fought with ANZAC forces at Lone Pine and elsewhere and also made up the bulk of troops who landed at Suvla Bay in August 1915 in yet another unsuccessful attempt to break the deadlock in the campaign. 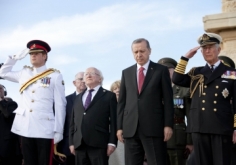 There are white carnations on the graves of the erstwhile forgotten Irish of V Beach this morning. They were put there by a president and by his wife, and by two princes of the army in which they fought and died.

One is on the memorial grave stone tablet of Robert Ludlow, formerly of Magdaline Terrace in Galway. There’s one for Capt Walford VC and one for Petty Officer William Medhurst, a young sailor who rowed the Dublins and Munsters on to the beach at Sedd-ul-Bahr, where they were mown down.

As the bullets peppered his boat and the Irish men died or fell into the sea wounded, Medhurst dived in to help, sustaining fatal wounds in the process.

V Beach cemetery contains the bodies of some 700 soldiers who landed at Cape Helles in late April 1915. Only about 200 have been identified, and most of them were in the Royal Dublin and Royal Munster fusiliers…

At the top of the cemetery, Sabina [Higgins] called her husband to come quickly. She was standing at the tablet for Company Sgt-Maj D Danagher of the Munsters who died, aged 37, on April 25th, the first day of the landings. His grandson became the first Labour mayor of Limerick, a fact known to the President.

“Isn’t it great that we found him?” said Sabina to her husband as they placed three flowers on his memorial stone.

Speaking at Istanbul earlier in his trip, Michael Higgins said in a speech to members of Turkey’s Irish community:

Many of those who had served with the British army were marginalised, and a rift was opened between those who may have had poverty as their shared background…

Today, we pay our respects to the memory of all those men whose potential and promise were lost in Gallipoli a century ago. We do so with a new, more inclusive insight and understanding of the circumstances of the time.

His words echoed those of his predecessor, President Mary McAleese, who visited Gallipoli in 2010 in the first official Irish recognition of the sacrifices of Irish born soldiers in this battle.

The Irish Examiner reported at the time that President McAleese told a commemoration at Green Hill cemetery where she unveiled a plaque and where many Irish soldiers’ remains lie, that each one killed in the battle deserves respect and remembrance.

The distance of time and historical perspective can allow us to question the folly of that war and the appalling waste of countless wonderful, courageous young men on both sides, said Mrs McAleese.

The Irish who fought for the British Empire here were not only destined to be overwhelmed by those who opposed them but to have their memory doubly overwhelmed, for they fought in a campaign that was lost and so long overlooked, and back home fellow citizens were taking on the might of that same empire to secure Irish independence.

Those fortunate enough few who returned alive from Gallipoli returned to considerable ambivalence, even hostility about their role and their sacrifice.”

Following the Commonwealth and Ireland service, Michael Higgins attended a French commemoration at the French monument and cemetery. The next day, he participated in the dawn service at Gallipoli in the company of the Australian and New Zealand Prime Ministers as well as Princes Charles and Harry.

President Higgins laid a wreath at ANZAC Cove ‘on behalf of Ireland’ and later attended the Lone Pine commemoration, in memory of a particularly bloody battle in which Irish units fought alongside Australian soldiers in a bitter but successful struggle for a tiny piece of land.

His last visit for the day was to the New Zealand memorial service at Chunuk Bair where again Irish units fought with the Kiwis.

As someone who has relatives who died at Gallipoli and in the Somme, I have an appreciation for how these men and their legacies were overlooked in Ireland for decades. The centenary provides us all with an opportunity to fully remember and respect the actions of those young men, and to acknowledge the major role played by Irishmen in the First World War.

have been held in Grangegorman Cemetery since 2006. This year Minister Ó Ríordáin also attended an event at Glasnevin Cemetery where he was joined by a number of foreign ambassadors to Ireland, including British Ambassador. According to UTV, the event included a wreath laying ceremony under the Cross of Sacrifice to remember those who died during the campaign.

The ceremony also included the unveiling of six commemorative stones to honour the six Irish men who were awarded Victoria Crosses, four of which for their actions in Gallipoli, according to the UTV report. One of them was William Cosgrove shown at right.

Chairman of the Glasnevin Trust, John Green, said it was important to “remember all those who died and served their country with honour. Until very recently the sacrifices of 3,000 Irish soldiers who died in the mountains of Gallipoli have gone largely unnoticed. By our presence here today we hope we go some way to remembering and honouring these brave Irishmen and all who died at Gallipoli,” UTV reported him saying.

To coincide with the Gallipoli centenary, the Irish Post Office, An Post, released two new stamps to commemorate the landings: a 68c stamp of Irish soldiers in a Gallipoli trench and a €1 stamp with the SS River Clyde ship that brought 2,000 of the 70,000 invasion force to Cape Hellas.

An Post says the stamps were designed by Dublin-based Vermillion Design, the 68c stamp shows a photograph of Irish soldiers in a trench at Gallipoli while a €1 stamp features the SS River Clyde, the landing ship which carried 2,000 of the 70,000-strong invasion force at Cape Hellas.  A special First Day Cover envelope shows Staff Sergeant William Cosgrove from Ballinookera, Co Cork, of the 1st Battalion of the Royal Munster Fusiliers, who received the Victoria Cross for bravery during the ‘V’ Beach landings.

The main British ANZAC day commemoration was held at the Cenotaph in Whitehall attended by senior members of the English royal family, Prime Minister David Cameron and top military figures as well as Australian Attorney General George Brandis. During the service, the verse from Laurence Binyon’s poem For The Fallen, which begins with the memorable line ‘They shall grow not old, as we that are left grow old’ [better known in Australia as the Ode of Remembrance], was read by 22-year-old Michael Toohey.

Mr Toohey’s great great uncle Private Thomas Toohey was serving with the Royal Dublin Fusiliers when he was killed in action during a Gallipoli landing at V Beach, on April 25 1915 aged 22.

Keith Harvey is  editor of  ‘The Debate’, the journal of the Australian Institute of Employment Rights and is a trustee director of an industry superannuation fund.