An interview with one of Northern Ireland’s leading artists who has just written his autobiography – The Last Minstrel by John Hagan about  his artistic influences, painting style, music and his relationship with the land of his birth.

Q.  Which artists have influenced your art?

A. Definitely [Northern Ireland artist] John Luke, although I would say he must have known the work of another artist who influenced me, American, Grant Wood. Perhaps my greatest influence was Desmond Kinney who taught me at Ashfield Boys, and who managed to get me 23 periods of art a week. I was only a pupil at Ashfield for two years before going out to work as a ‘real’ artist. Another great influence, who taught me more than I learnt at Art College, was Robin Holmes, the designer at Nicholson and Bass. His influence was commercial of course.

Q. Your early career was in design and advertising. How did this impact on your art?

A. Experience in design and advertising puts me in a position of knowing how people think regarding purchasing a piece of art, but I try not to let this influence me too much. To sell a piece of work in Ireland, or Tasmania, it must have distance, water, reflections and sky! So I will go out of my way to satisfy myself and intentionally create a work with no sea, no reflections and no sky! (well sometimes!).

Q. You have described your work as being ‘sophisticated naive’. What are the essential characteristics of this style?

A. To try and interpret things in a typical way rather than specifically. For example, I look at something like the Cave Hill, or any specific hill, and I think in terms of just a hill. I see a tree as a tree, not any particular tree. I know ALL my European trees exceptionally well, in leaf, or in winter and nowadays I know gum trees exceptionally well too. I am told I have a great understanding for composition and man’s involvement with the landscape.

Q. What was the best art advice you ever received?

A. Desmond Kinney told me I would never be a painter – I would be a designer – something which I didn’t understand until much later. I have since been told I am a painter with a brilliant sense of design!

Q. You are an accomplished harp maker, harper, guitarist, folk singer and recording artist with an array of CDs to your name. How has music shaped your life and art?

A. Completely. I usually use a line from a traditional folk song for my next creation. Especially if there is a descriptive line such as in the following: “where Lagan streams”, “Just as the tide was flowing”, “down by yon flowery garden”, or “At the dawning of the day”. Music, for me, these days has lost a lot of its charm as I suffer terribly from tinnitus. Somehow music has become just selected and organised sound.

6. Q. While you were born in Belfast, you have lived more than half your life abroad – South Africa, London, Sydney, Hobart, France. What is your current relationship with Northern Ireland? 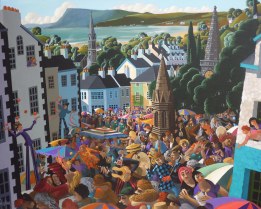 A. I return to Ireland as often as possible, perhaps three times a year and usually stay three weeks at a time and travel extensively to refamiliarise myself with traditional ideas and customs. For example, I have just finished a painting of the fair at Ballycastle which had impressed me no end from the description in the old song. I did this painting out of my head, how I imagined the fair should be, ‘would you like to treat your man to dulse and yellow man at the fair at Ballycastle-o.’ While this painting was a joy to do, in reality, the fair is a dismal affair, selling tack and out of date videos and generally just rubbish. But the idea of it lingers!

I thoroughly enjoy visiting Belfast especially for the food which has developed beyond belief in the last six years. The coffee was good for a while but it is on the decline, the bread is still out of this world but a good wheaten scone, or a date scone, is sometimes hard to find. I noticed the Ulster Fries are disappearing which pisses me off no end although my wife, Stef, won’t let me eat them! As you will gather, food has always been my passion. An Ulster Sunday lunch with a choice of, five courses consisting of prime roast beef, roast lamb or roast pork can’t be beaten anywhere in the world, and through the week, battered cod, haddock and of course the best chips ever! Never to miss is the ice cream at Archies, on the Newtonards Road near The Arches, and I enjoy seeing the delight on each customers face. 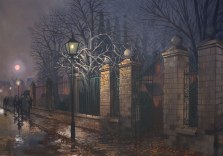 Of course Belfast is a great place to catch up on all the new movies where Stef and I sit exhausted and fall asleep.

We always avoid the silly season and everyone in Belfast knows when THAT is!

Another attraction is my favorite tool shop, MacMasters, in Church Lane, in the centre of Belfast. The original owner was a friend of my Dad. And of course they still have the time and the inclination from the Albert Clock.

A new haunt for us is St. George’s Market. I did a painting of that in the snow – no sunny sky and no reflections!

I enjoy driving around the countryside looking at topical events and car boot sales and although I have a lot of difficulty making myself understood with my South African/ Australian accent, I can understand every word they say.

Still can’t take the religious signs nailed on to the trees and painted on rocks.

Q. Why did you choose Lherm (France) as your new home?

A. Lherm chose me! It is a romantic medieval village, and a hop, skip and a jump from anywhere in Europe and close to Belfast in terms of time and money! And Stef lives here! Certainly it’s NOT for the food. No one here gives a tuppence about art and I live on a day to day basis with no artistic ego, which leaves me free to pursue philosophy.

A. I have retired, from painting and playing the sort of art and music which is expected of me. I now play the Koto, which is a Japanese harp.  As art, for me, is what you can’t do rather than what you can do, I am consequently in search of something that I can’t do! (which is proving rather difficult). Meanwhile, I am enjoying, writing and philosophy.

John Hagan is a graduate of TCD. He emigrated in 1976 to take up a lecturing position in Perth, Western Australia. Now living in Tasmania, he contributes to magazines and newspapers in South Korea, UK, Ireland, Canada and Australia.

For information on Callaghan’s autobiography, see: ‘The Last Minstrel’

Click on graphics for enlarged view of George Callaghan’s paintings