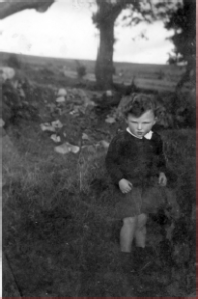 It was  Sunday  12th of June  1949. My mother,  having  returned from early Mass,  was combing my curly uncooperative hair and my father was repairing one of my boots on the small foot of the last. A bright summer sun illuminated my world.  I was to be brought to the other side of Kylebeg, to my mother’s uncle, Phil Molloy, whose nephew Dan Quinn was down from Dublin and would take my ‘snap’.

Across the valley was a long walk for a three–year  old. I was put standing on a dry stone-wall which was probably three feet high but to me seemed like a skyscraper..

My Grand-uncle was an economy-conscious bachelor, sheep farmer, not in the habit of dispensing lemonade or sweets and  wouldn’t even dream of pressing a shiny shilling, or even a tanner, into the sweaty palm of a shy junior. A neighbour said of him,

If he had two apples he’d eat the small one and keep the big one for himself.

The click of a Brownie didn’t impress. The resulting image is the only pictorial image of me until I made my Confirmation  seven years later.  I recently found the snap and wrote a poem about it:

I was claiming that it was the shortest poem ever written until it was  pointed out to me that Mohammed Ali had written a shorter one:

I’m the only  participant of that Sunday morning  cameo still on this planet  and  what about the snap? In the words of Percy French, ‘I take it out and look at it and not feel so forlorn.’ And I wonder was Edward Steicen right when he said,  Photography records the gamut of feelings written on the human face.’

While I have been accused of being an attention-seeker, by those who know no better, I am camera-shy.  And although I have been on top of some of the highest buildings in the USA I have a slight fear of heights. I put it down to the perceived height of that stone wall sixty five years ago.