The event was titled ‘A Long Way to Tipperary’, and was presented in Bendigo by the Central Victorian Irish Association (CVIA) in September this year.  A description of the content and the nature of this concert was published in Tinteán in advance of the event.

The concert was held at the Old Fire Station, Bendigo, to full capacity audiences on both nights. The venue proved to be eminently suitable for re-creating the mood and the atmosphere of Ireland during the Great War.  The story of Ireland’s involvement in that devastating conflict was told through a mixture of narrative, prose, poetry, drama, visual images, and song.  The concert was divided into four quarters, each quarter being introduced by a narrative passage which narrated the historical back ground.  The dramatic scenes were taken from George Bernard Shaw’s ‘O’Flaherty VC’ and from Frank McGuinness’ ‘Observe the Sons of Ulster Marching Towards the Somme.’ 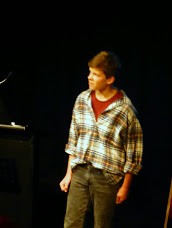 The prose readings were selected from Sebastian Barry’s powerful novel ‘A Long Long Way,’ while the most memorable passages of poetry were those by Francis Ledwidge, Ireland’s greatest war poet; a Meath man who was killed in the battle of  Passchendaele, 1917.

The song content of this concert featured street ballads, folk songs, art songs set to poems by Ledwidge,  drawing room songs, and a couple of selections from grand opera.  Historical singers  represented were Margaret Burke Sheridan, John McCormack, and Amy Castles, all of whom sang in fund raising and morale boosting concerts during the First World War.  Among the most memorable performances of the evening were Carolyn Vaughan singing  of  ‘Visi d’Arte’ from Puccini’s ‘Tosca,’   Frederick Kelly’s rendition of ‘I Hear You Calling Me,’  Bryan Milne’s sincere interpretation of ‘The Foggy Dew,’ and thirteen year old Liam Brown’s moving and mature interpretation of ‘The Green Fields of France.’

Most of the singers were accompanied on the piano by John Clancy, director of the concert, writer of the narrative, and composer of two of the songs.  The audience became involved in singing some of the famous World War I songs, and the whole concert ended with the full company singing ‘Non Nobis, Domine’ by Patrick Doyle, followed of course by ‘Danny Boy’.

Probably the most moving part of the event were the images of the ‘Postcards from the Front’ which had been generously supplied exclusively to the CVIA by the Dublin City Archives.

Observe the sons of Ulster

A representative from the Bendigo Legacy Foundation read a very moving tribute to the Irish ANZACS.  This honoured the 7000 Irish born men, and some women, who had joined the AIF from Australia during the Great War.  John Clancy is due to present a Paper on this little known subject at Newman College, University of Melbourne, on Tuesday 11th November at 6 pm.   A donation was made from the profits of the concert to the Legacy Foundation.

In summation, ‘A Long Way to Tipperary’ proved itself a most fitting tribute to the 200,000 Irish men and women who served in the Great War, with 50,000 (one in every four) of them making the supreme sacrifice.

The full company sings the finale.