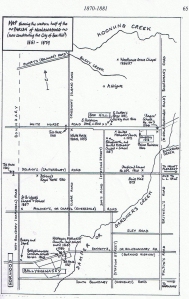 Ballyshanassy is not a place in Ireland. Rather, it is the former official name for the suburb of Burwood, created in 1858, in Melbourne’s eastern suburbs, . The village of Ballyshanassy, as it then was, was established in the area bounded by Warrigal and Highbury Roads, Burwood Highway, then Ballyshanassy Road and Gardiners Creek  also known at the time as Damper Creek .

Ballyshanassy was then in the Shire or Road District of Nunawading,  later the Box Hill Shire and now part of the City of Whitehorse map.

Why Ballyshanassy? Not for any connection with Ireland or because of an Irish population. It was in honour of John O’Shanassy who took office as Victorian premier for the second time in 1858 as the village was surveyed. O’Shanassy was of Irish Catholic background and his second Ministry included Charles Gavan Duffy as Commissioner (Minister) for Lands.

John O’Shanassy was born in Tipperary and decided to settle in Sydney on the recommendation of a relative. Arriving with his wife Margaret in the Port Phillip District in November 1839 on his way to Sydney, the O’Shannasys were met by Melbourne’s first Catholic priest, the Rev Patrick Geoghan, who persuaded the couple to settle in Melbourne instead.

O’Shanassy opened a drapery shop in Collins Street. It was a very successful business, largely through his wife’s shrewd business sense and perserverance’, according to the Australian Dictionary of Biography, the business supporting O’Shanassy at a time when politicians were not paid.

By 1846, John O’Shanassy had become active in local Melbourne politics, campaigned for separation from New South Wales. He championed the rights of miners and was a member of the committee of inquiry into the operation of the Victorian goldfields. After separation from NSW and the introduction of responsible self-government in the new colony in 1856, O’Shanassy became a member of the new Legislative Assembly.

In 1857, he became Victoria’s second Premier, although his first government lasted only 50 days. He became Premier again in 1858-59 with Duffy as his Deputy and again in 1861. The prominence of O’Shanassy and Duffy as Irish Catholic leaders of Her Majesty’s government in Victoria may have been a first for the British Empire. O’Shanassy was knighted, both by the British Crown as well as by the Pope.

O’Shanassy became a wealthy man in the colony. Among his properties was a mansion in Camberwell, which he called Tara. The mansion was subsequently bought by the Anglican Church and is now known as Broughton Hall, an aged care facility.

What’s in a name?

Explanations differ slightly as to who gave the area its name. In his history of Box Hill, Andrew Lemon says:

In 1858 the land in the bottom south-west corner of the parish which had been reserved since 1852 was surveyed into town allotments and given the grandiloquent name of Ballyshanassy in honour of the then premier, John O’Shanassy. Its streets were named after his favorite Ministers, John McIntyre, Charles Gavan Duffy, George Harker, Richard Ireland, George Evans….

These street names still exist as a quick check of the Melbourne Melways reveals. However, an unfortunately named Cromwell Street now divides the area intersecting McIntyre, Duffy and Ireland Streets! Who could have done such a thing? 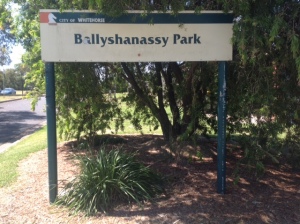 A plaque installed by the Council at the new Ballyshanassy Park claims that the idea for the name was Duffy’s stating that ‘he wished to name two towns, one after himself and one after his friend Sir John O’Shanassy…A village in Duffy’s Western District electorate became Ballyduffy and Burwood became Ballyshanassy’.

No trace can be found today of any Victorian Western District town called Ballyduffy. The 1879 Victorian Gazetteer contains an entry for Ballyshanassy but no reference to Ballyduffy suggesting that if the latter name existed it was short-lived. Some sources suggest that Ballyduffy was in fact a locality name in Ringwood, in Melbourne’s outer east.

Today, the former village of Ballyshanassy is uninspiring with no trace of its origins apparently remaining. To the west of Cromwell Street the area is light industrial and to the east it is a pleasant residential area.

In its heyday, however, Ballyshanassy rivalled its northern neighbor, Box Hill, in importance and could have become the seat of local government. Andrew Lemon notes:

Had Ballyshanassy been able to secure the shire hall and offices, the history of the Box Hill municipality would have been very different. And in fact Box Hill did not finally secure its predominance until into the 1880s; in 1860 it was no foregone conclusion and there were torrid battles over where the Road Board would meet.

Ballyshanassy not only lost out to Box Hill, it eventually lost its name as well. Lemon says:

It (Ballyshanassy) continued to think of itself as a reasonably progressive little spot, and grew restive under the name of Ballyshanassy – perhaps because it sounded too quaint and provincial, or perhaps there was no love for John O’Shanassy. In 1874 the Nunawading Council resolved that the name should be changed to Norwood,…but for some reason this never came about, and five years later the residents were still complaining about the name…The Council resolved to apply for the name of Burwood…Ballyshanassy disappeared into history when the new name was gazetted on 9th May 1879.

Niall Brennan, in his book  A History of Nunawading has a slightly different view:

In 1879, Ballyshanassy became Burwood after a brief spell as Norwood…why the name was changed is hard to explain except that an Irish name was not good enough for those study Anglo-Saxon pioneers.

John O’Shanassy’s name remains part of the Victorian landscape, as the O’Shannassy River and Reservoir built on it are named for him (albeit with an extra “n” in the spelling). It is a pity that the locality of Burwood has lost its connection with this political pioneer and champion of the rights of Irish Australians.