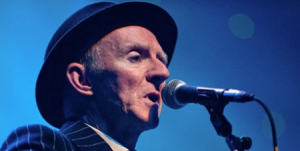 Philip Chevron was the lead guitarist with the famous Irish group ‘ThePogues’ He was a great Irish songwriter who found worldwide recognition. In August he described himself as ‘gay, Irish, Catholic, alcoholic Pogue… about to die from cancer.’

Chevron left a substantial body of work, including studio and live albums with the Radiators from Space (later the Radiators), solo work which included a foray into the songs of Brecht and Weill, and the fruits of his performing and song writing with the Pogues.

It was for the latter’s album If I Should Fall from Grace With God (1988) that he wrote Thousands Are Sailing, a poetic saga of Irish emigration to the New World with lyrics that roved poignantly across the momentous events of Irish-American history.

That composition gained Chevron his greatest international recognition, while becoming an instant classic among Irish listeners and a song regularly covered by other artists from his homeland.

During the mid-1970s he became enamoured of the punk music which had blown in from Britain and triggered a distinctive local echo across the Irish Sea. In partnership with Pete Holidai and Steve Rapid, Chevron – who possibly took his adopted surname from the jazz record label Chevron Records – formed the Radiators from Space in 1976, laying a claim to being Ireland’s first punk band.

Meanwhile The Pogues were also keen to work with Chevron, and he was invited to join them as temporary cover for the banjo player Jem Finer, even though he had never played the banjo before. Subsequently MacGowan decided he no longer wanted to play the guitar and Chevron took on the job full-time.