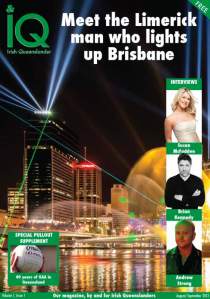 Irish Queenslander is the only news, events, features and sports print publication produced exclusively for the Irish community in Queensland, Australia.

Mary Allen, its dynamic founder, comes from Cork city, Ireland. She worked for nine years as senior sub-editor and columnist at the city’s daily newspaper, Evening Echo. She has lived in Australia for three years, in Sydney and  Brisbane.

Doing freelance reporting and photography on Irish stories in Brisbane, Mary continually heard that organisations needed help and volunteers but found it was difficult to get their information into the community. There was no one central source of news for the community directed solely at Queensland. There were many strong (Irish) communities, and  many interesting events happening, but that they needed a voice in Queensland.

Working part-time as a publications coordinator for a not-for-profit organisation, she had turned their magazine from black and white to colour and tripled its revenue within a year. It gave her the confidence to realise that she was capable of running a magazine by herself and making it a success.

In the 2013 St Patrick’s Day parade in Brisbane, Mary marched with a community organisation she had been volunteering with. She was blown away at the size of the crowd – 30,000 people lined the streets of the CBD, all decked out in green. It cemented her belief that an Irish magazine could work in Queensland. She knew she had the skills to make it happen. And she knew she would regret it if she never tried. The workload was daunting, but the seed was sown and she got to work.

Her big ambition was a high-quality magazine, with positive stories that showcased all that is good about the Irish community. It also had to be free of charge.

Designing a magazine from home, getting columnists and advertisers on board, networking and taking photographs at events, setting up social networking pages and a website, and doing all the background work involved in setting up any small business, was daunting.

The first edition of Irish Queenslander was launched at Queensland Gaelic Football and Hurling Association’s 40th anniversary family day. True to Mary’s desire to help community organisations it included a four-page souvenir pull-out on the history of the GAA in Queensland. It included 32 pages of news, events and sports, all full colour and printed on high-quality, glossy paper. Community associations were given free pages within it so that they could get their news out all over Queensland. The first print run was 2,000 copies, distributed through Irish pubs, club and associations, concentrated mainly in Brisbane, the Gold Coast and Sunshine Coast. It was also published online at http://www.irishqueenslander.com

The print copies were snapped up. Hundreds of followers were garnered online and the magazine received overwhelming support and positive feedback from the community.

The magazine is bi-monthly. The print-run will be 5000 copies and will be  distributed to all areas of Queensland and into the northern reaches of New South Wales. The magazine is also available by subscription.

Mary says that inspiring stories are sent to her daily and she could fill the magazine twice-over easily, as there is such an active and vibrant Irish community in Queensland.