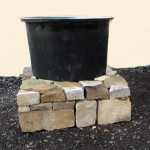 Donegal man John Cassidy is embarking on a unique project. The following is the story behind it.

In 2011 John found an old famine-pot, broken in pieces, in south Donegal. Most Irish people are conversant with the great famine 1845-1849, but many  are unaware of the vital role played by the famine pots.

In 1847 three million people were dependent on the daily ration of soup served from the large cast iron pots. One of the famine pot was located on the roadside in the Town land of Cullionboy, in the Parish of Townawilly County Donegal. It became the property of local sheep farmer Patrick Colhoun and for many years it was used by local farmers when they were dipping their sheep, before falling into disrepair. A quick check revealed only two small pieces of the pot were missing. One of the pieces was found a few days later in a nearby stream. Thanks to the expertise of Stephen Jarvis, who was given the onerous task of welding the pieces together, the famine pot was restored to its former glory. In 2012, he had it welded, restored and it was mounted outside Leghowney Community Hall.

Such was the interest shown by American tourists that John decided to do some research on the whole Famine-pot/soup–kitchen aspect of the famine and found that because of bigotry, pride, misguided patriotism and inherited false information, this aspect of the potato failure was almost air-brushed from our history. In conjunction with An Lar TV, he is now making a short documentary on the subject. Three prominent historians, Dr Ciaran Reilly, Fr Anthony J. Gaughan and a Quaker historian, have agreed to speak on camera and John is also hoping to interview a number of centenarians who knew famine survivors. It will be broadcast on An Lar TV,  the Irish Community TV  internet TV channel for the Irish Diaspora as well as local communities in Ireland.  It reaches many diverse groups of the Irish Diaspora in more than 120 countries.

It will also be advertised on:  Irish Famine Pots . The target market is Ireland and abroad, mainly the USA.  John is hoping to get the documentary into schools in Ireland and abroad. John may be contacted at: irishfaminepots@gmail.com