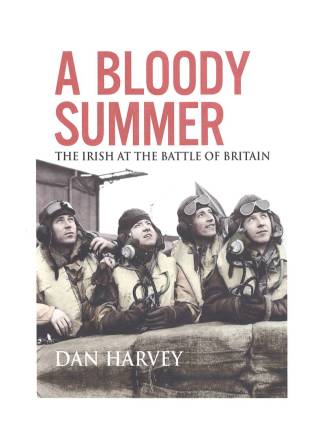 A BLOODY SUMMER. The Irish at the Battle of Britain. Dan Harvey. Merrion Press. Dublin. 2020. 112pp

It is estimated that some 120,000 from the island of Ireland joined British armed forces during World War II, around 70,000 of whom came from the Republic. This is in addition to another 60,000 or so Irish civilians who were employed by the Ministry of Aircraft Production and the Ministry of Supply and around 100,000 more supporting the war effort through their work in munitions factories. While this book focuses on the Battle of Britain, it also acknowledges not only those who served as pilots, but the contribution of the many Irish serving in all areas of air operational support.

In his account, the author begins with an outline of the situation with regard to a possible invasion of neutral Ireland and the measures set up to defend such an attack. He goes on to set the scenario leading up to what became the Battle of Britain, the defining air war in defending Britain against Nazi Germany. He explores the significance of key turning points in the following air battle which took place over some five months of 1940 and outlines the contributions of some of the Irish aircrew involved, in some detail.

One of these brave souls was the legendary air ace, Brendan ‘Paddy’ Finucane, from Dublin, who became, at 21 years of age, the youngest officer to ever be promoted to the rank of Wing Commander. He accounted for the destruction of some thirty enemy aircraft but tragically lost his life in July 1942 when his Spitfire was hit by ground fire when returning from an attack on a German airfield. He ditched into the sea, never to be found. Three thousand people packed into Westminster Cathedral for his Requiem Mass and a nationwide appeal resulted in the bequest of the ‘Finucane Ward’ in Richmond Royal Hospital. The Finucane family had a proud history of participation in British conflicts. The hero’s grandfather had fought in the British Army in World War I while, in a different twist, his father. Andy, had been an active member of the Old IRA, fighting against the Black and Tans in the Irish War of Independence. Churchill is quoted as saying ‘If ever I feel a bitter feeling rising in my heart about the Irish, the hands of heroes like Finucane seem to stretch out to soothe it away.’

This publication is the latest in a series by military historian and retired Irish Defence Force officer, Dan Harvey. It won’t take up a lot of space on your bookshelf, and is not only an acknowledgement of the participation of Irish people in the significant Battle of Britain in the Second World War but also an excellent account of that particular episode in the Allied war against Nazi Germany. The cover features a photograph of four young pilots, but I was stunned to discover, in the pages immediately following the title, that the portrait was of four Czech Hurricane pilots. The relevance to the sub-title of the book escapes me! Notwithstanding this, and an assault on my linguistic sensitivity by the contributor of the Foreword to the book, who used the collective noun ‘amount’ to describe the number of pilots, I found the author’s account to be both informative and interesting and a valuable addition to his series on Irish military history.