Last month we had an account of Fr Bob Arthure’s cocooning with the good nuns at Glencairn Abbey where he has found a new interest, writing blogs. Here are some of his writings on St Carthage.

This wood carving of St Carthage by John Hayes stands in Lismore’s Millennium Park. The carving also includes Robert Boyle ( father of chemistry and son of the Earl of Cork); the Lismore Crozier; the Book of Lismore; the Castle; the bridge; and other local images.

One late afternoon near the river Maine in Kerry, while herding pigs for the overlord of the region, a young lad known as Mochuda (though Carthach – Carthage – was his official name), had a life-changing experience. A group of monks passed by, heading to their monastery, singing psalms as they went. The chanting of the psalms captivated Mochuda’s heart. Fascinated, he quietly followed the monks. Hiding near the monastery entrance, he watched as they ate supper and sang more psalms until bed-time. The abbot stayed up to pray after the others had gone to bed. In this glimpse of monastic life he found his own vocation.

When Mochuda was old enough to make his own life-choices, he declined the path of marriage, wealth, and a career in the overlord’s service. Instead he followed the spirit in his heart prompting him to be a monk, dedicated to God alone, singing psalms, working, and following the Gospel in community. He made his way to Bangor (Co. Down) and spent a year at St Comghall’s monastery, learning the monastic way of life. Then (c. 595) he moved to Rahan, Co. Offaly, and established his own monastery.

The monastery at Rahan grew, and in time Mochuda became abbot of a large and wealthy community. But this did not make him universally popular; after many decades there some jealous local leaders, both secular and religious, turned against him and demanded that he leave. Eventually he was expelled and forced to quit the place he spent so many years building up. His monks were banished with him.

After a hazardous journey Mochuda and his monks arrived, probably crossing the Knockmealdowns at the Gap, and he saw before him ‘the beautiful vale where the Blackwater flows.’ Something told him that this was the place; here he could rest, and spend whatever few years remained to him. So the monks pitched camp near the bank of the river, and began to establish a settlement. The site of Lismore Castle is reputed to be the location of that first settlement, a collection of freestanding huts.

Mochuda had no dream of building a new Rahan. He had no big ambitions for this place; it would be small and unpretentious. So when a holy woman came by and asked what his monks were doing, he replied that they were building a ‘lios beag’, a little fort, around the new settlement. But she prophetically replied, ‘No, this will not be a little lios; it will be a Lios Mór.’

And so it came to pass. The monastery at Lios Mór grew and flourished, renowned as a centre of holiness and as an international educational establishment. King Alfred the Great of England and St Malachy of Armagh are said to have studied there. Lismore was already on the map in the first millennium, long before the Castle was built or Robert Boyle’s scientific achievements made it famous. And the old monastic city covered an extensive area, including the land on which Glencairn Abbey stands today. But Carthage did not see any of this. He spent only two or three years in Lismore, and died in 637 or 638. In time Lismore became the head of a diocese, and St Carthage is now the principal patron of the Lismore part of the diocese of Waterford & Lismore. 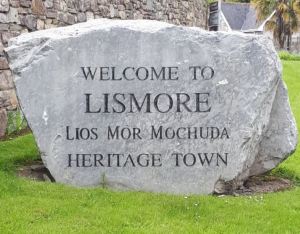 Until fairly recently, the town of Lismore was known in Irish as Lios Mór Mochuda (Mochuda’s Lismore). Then came a trend to drop the ‘Mochuda’: road signs for instance, or the sign over the Post Office, use only ‘Lios Mór’. It is good to see the full name on the newer ‘Welcome’ signs on the approach roads from Tallow and Cappoquin. The name is also found in Scoil Mochuda (a primary school in Lismore under the patronage of the Church of Ireland), and in Bóthar Mochuda, a new residential area. Of course it has always been there in the townland of Seemochuda. Both the Catholic and Church of Ireland churches are named St Carthage’s, as is St Carthage’s House (a residential care home).

Formerly it was not uncommon for boys in the Lismore area to be named Carthage, but this seems to be rare now. In an age of renewed pride in our Irish heritage, might Carthach be considered as a name for a new baby? Carthage/Carthach/Mochuda would also make a good Confirmation patron.

All in the Family

*Fr Bob is uncle to Susan Arthure the South Australian archaeologist whose work has featured previously in Tinteán. Susan has recently won the South Australian Wakefield History Essay Prize for her essay on South Australia’s Kapunda Irish that featured as a chapter in the 2019 book Irish South Australia: new histories and insights. There’s a video of the socially distanced prize-giving event on Facebook at https://www.facebook.com/HistoryCouncilSA/videos/3103654403094031/