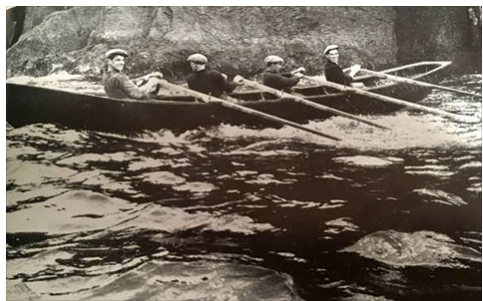 There was another night we were fishing out of Cuan Ard Na Caithne (Smerwick Harbour) and we settled at the back of Bínn Diarmada, the easterly peak of the Three Sisters, and it was slow. We cast a net and then to ease the monotony we threw out some hook lines. Not a thing of any colour stirred.

There were four of us in the naomhóg: Ger whose boat it was, Pádraig Lynch Baile ‘n Éanaigh, Jack Thomáis Baile Oughtrach who was home from Australia and myself. We were about to give it best and haul in when Ger spotted a light and it looked headed in our direction. It was a large fishing trawler and we doubled up as our distrust of the type was well founded.

We made it into the harbour proper and this mighty trawler came alongside at a safe distance. Well, the array of lights on deck looked to me like a floating town in the middle of the night. We were hesitant to say the least but a fella with some sort of megaphone yelled to us that they needed our help. Ger, of course responded yes and we rowed closer.

They needed a favour. The captain was in dire straits and very badly in need of a drink. Would we bring him to shore for the sake of the whole crew? Ger responded that we would of course and next a grizzled old geezer alighted and sure-footedly, with the help of a roped contraption made it into the naomhóg.

He didn’t say a word. We knew where to go and we rowed towards Baile Na nGall, (Bally David) to Johnny Frank’s Pub. Ger and I accompanied him up the Quay to Johnny Frank’s and after a couple of smart raps on the door Johnny appeared in some form of night attire. It was drawing on 2 am. Ger explained the situation to Johnny, and I stood by as he welcomed him into a room, sat the old geezer at a table and left him with a bottle of whiskey and a glass; then he took off upstairs back to bed.

We rowed back to the trawler to tell them he was ok. When we pulled alongside the same rope contraption was lowered and we were invited on board. Ger, Pádraig and I went and Jack stayed in the naomhóg. Well, it was massive. It was the biggest ship I’d ever seen and with all the lights it seemed like the middle of the day.

The first mate noticed my wonder and asked if I’d be interested in joining the crew. Ger told me “bheadh sé ró dheacair air d’athair’s do mháthair fé’n dtráth seo” The first mate asked me to translate and I told him it would be too severe for my father and mother at this stage. I was 17.

We returned to the naomhóg and next a gib of a crane appeared and lowered several baskets of all kinds of fish into our boat and we had to tell them to stop. O my God, a night we started with nothing and ended up with it all.

When we reached the Béal Bán quay, Pádraig hopped on his bike for Baile’n Éanaigh and it wasn’t long thereafter we heard the iron band of the pony and cart knocking sparks from the road down Bóthar na gCuainte. Those who never believed in the fairies may have had second thoughts at 4 am that morning.

We loaded up and distributed a share to each of our houses. There was enough fish to last handily for the winter and beyond. It was about 5 am then and with a few hurried words to Mam and Dad, I collapsed into bed. By the time I got up, Dad had distributed a hefty strop of fish to every house in the village. Dad bought rough salt in Dingle, Mam cleaned the fish and stored them in a wooden barrel to last a long time to come.

Ger is gone now; he, Pádraig & Jack Thomáis are fishing the high seas in heaven. Jack went to England and I visited him there a few times. Every Saturday when he was off from work he’d head to Barking in south London and spend the day just watching the ships and the boats go in and out of the port.

Muiris is a retired town planner, living in New Rochelle, New York. This story is taken from his facebook page. In reply to comments – mostly in Irish – at the end of the story, he explained that the captain had to be rowed back to his trawler and that he had plenty of money. He surmised that the crew was Welsh.

A naomhóg is also called a currach.