Books by Dublin writer John Boyne are published in more than 50 languages. He may well be the modern Irish writer with the largest number of books sold around the world.

That distinction would be greatly helped by the success of his third book, The Boy in The Striped Pyjamas. Filmed in 2008, it tells the story of a nine-year old German boy whose father has been asked by ‘The Fury’ to run a certain barbed-wire-protected establishment in ‘Out-With’. The story deals with the friendship he forms with the boy who gives the book its title.

Originally thought of as a children’s book, adult readers quickly realised that there was much more to it; today it has sold more than nine million copies. Boyne returned to Hitler’s Germany some years ago with The Boy at the Top of the Mountain, in some ways a more subtle and nuanced treatment of childhood which did not have the success of the earlier one.

Boyne followed Pyjamas with a story set among the idle upper classes of pre-WWII England. Titled Next of Kin, it describes a world of privilege and hedonism where snobbery and personal contacts take precedence over everything else. In their exclusive clubs, the characters discuss ‘the problems of the world, the government, the French and the young in that order.’ Topics not covered included women and football, because they knew little about either. Most of the cast are pure caricature. The central one is a layabout named Owen Montignac who is evil and without conscience; the others in the book are merely without conscience.

Still writing fiction around historical events, Boyne next turned to Mutiny on the Bounty, told through the experiences of a precocious servant-boy to Captain William Bligh. The fact that the reader probably knows how events end up does not take from the book. Indeed, seeing the action unfold through the eyes of a teenager rather than as they might be described by a historian or someone with an interest in defending the reputation of Bligh or Fletcher Christian makes it a most enjoyable read.

In The House of Special Purpose, Boyne uses the story of the end of the Romanov dynasty as his background. Reviewing it in 2009, I wrote that 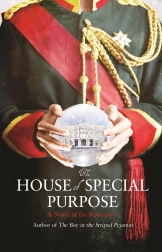 …although the book has history as its background, it is essentially a love story …

written with such conviction and by such a master story-teller that all disbelief is suspended. The realisation of what constitutes the core of the story dawns slowly on the reader – on this reader at least – like a good detective yarn, the hints carefully hidden, the pointers obscured by the elegant prose and the convincing voice of the central character. … The mastery of voice, the way that Boyne can convey the central character as a peasant without either trivialising him as a character or turning his language into a childish patter, is a perfect delight.

With The Absolutist, Boyne was back again in the First World War among damaged soldiers, conscientious objectors, suffragists and the complete outcasts who would not do anything at all to help the war. It is a story that highlights the distinction between physical and moral courage, unfolding slowly with much of the action carried in dialogue.

It took 15 years before Boyne was able to set a novel in Ireland. His experiences of abuse in school and his isolation as a gay man meant that he felt he could not write about contemporary Ireland. When he did so in 2014 with A History of Loneliness he made his central character a good priest who suffers from the bad reputation of his fellows. The background, as well as the author’s own experience of sexual abuse, means that there is a great deal of anger in the book, making for grim reading.

Boyne’s latest book, The Heart’s Invisible Furies is also set in Ireland. It can be read as a fictional examination of Irish attitudes to sex and particularly gay sex in the last seventy years. The opening chapter – as strong and gripping an opening as you will find – has a pregnant sixteen-year old girl being kicked (literally) out of her church and out of her home, without demur from either family or neighbours. That was 1945. The final chapter moves ahead 70 years and we learn that the Irish people have voted for the legalisation of same-sex marriage.

The young woman is Catherine Goggin from the small township of Goleen, south of Bantry in County Cork and it is interesting that a look at the results for that constituency show that the children and grandchildren of those same parishioners voted YES by more than 65 per cent in the above referendum.

The central character and first-person narrator in the story is Catherine’s son whom she gives up for adoption. When we meet him for the first time, he is seven years old, living in Dartmouth Square not far from the top of Leeson Street in Dublin with Charles and Maude, an oddball couple who ‘had named me Cyril for a spaniel they’d owned and loved.’

That seven-year gap is the basic structure of the novel, each chapter jumping seven years ahead in Cyril’s life. So, for example, at the age of 14, he is a student at Belvedere College, spending parts of his weekends with his almost permanently tumescent friend Julian wandering through

the grounds of Trinity College to gawp at the Protestants who seemed to have been dehorned by some benevolent shearer upon admission.

Those early chapters are deeply funny, reminiscent of J P Donleavy at his most picaresque. The book ties in to events and personalities of the time – the blowing up of Nelson’s Pillar for example, and the shenanigans of the trio of Haughey, Lenihan and O’Malley in the mid-sixties. Haughey appears again in the 1980 chapter, suitably menacing and sleazy, as does bouncing Bertie in 2008. And the fun comes back again towards the end of the story, with sparkling dialogue and savage little pastiches of the kind of attitudes of those times. Here, a man is explaining what he calls ‘the traditional family.’

‘Ah, you know what it is,’ said Peter. ‘A mammy and a daddy and a few kids. Look, Cyril, don’t get me wrong. I don’t have anything against your lot. I’m not prejudiced at all.’

‘He’s not’, agreed Ruth. ‘He’s never been prejudiced. Sure he had a whole lot of darkies working for him back in the eighties before it was even fashionable. And he paid them almost as much as he paid the Irish workers. We even had one in the house once. ‘ She leaned forward and lowered her voice. ‘For dinner,’ she added. ‘I didn’t mind.’

But the story is much more than a lighthearted romp. As hinted above, Cyril is gay and eventually has to leave Dublin for some years, first for Amsterdam and then New York. He is there in 1994 with his lover Bastiaan, a doctor specialising in the early research and treatment of AIDS. He finds that the American attitudes to homosexuality are no more friendly than the Irish ones. He leaves after he and Bastiaan are attacked in Central Park, with the latter being bashed to death, events which barely rated on the NYPD radar. The final chapters are set in Dublin.

The central theme of the book is sex, both gay and non-gay. All the characters, male and female, seem to be obsessed with it, either as enthusiastic practitioners, dour deniers or hypocritical denouncers. That may seem to suggest a kind of prurience, or an excuse for graphic voyeurism. But in fact, there is nothing here that should disturb a reader. Where there was an undertone of bitterness and sour anger in his previous ‘Irish’ book A History of Loneliness, the emotion here is one of sadness and almost despair at the way that society treated sexuality.

By turns witty and outrageous, reflective and bombastic, bitter and sportive, this is a savage commentary on prejudice and bigotry. Certainly, some of the characters are cartoon creations – Mary-Elizabeth Moffett, Mr Denby-Denby, Peter and Ruth, even Damir – and it would be easy to imagine that it will be criticised as much by gay folk as by straight, by religious as by impious. But the action never slackens and once you have read that opening chapter, you may write off your weekend.

Frank O’Shea is a member of the Tintean collective