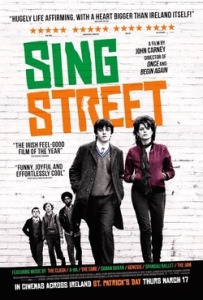 A Film Review by Frances Devlin-Glass

This film is pure wish-fulfilment fantasy: a cheesy romance/comedy with a bit of grit in the backstories, but best of all a teen film which celebrates music and the communities it forms. Moreover, it has a cathartic, and even moral, way of scuttling the bullies.

Set in Synge Street Christian Brothers’ College in the 1980s, this film could go in many directions at its outset. One imagines it could become a tale of a family in economic and domestic crisis ending in a divorce;  ; or it could be about sliding down the class scale; or it could be about brutality and bully culture in a poor inner-city school. Instead it heads down the path of romance by way of forming a teenage band. It’s witty and the characters totally endearing as they move from gawkiness to the uncertain assumption of grown-up-ness. It’s an upbeat, feel-good and do-good (but not too insistently!) film, which your teenage kids will also love. Who can resist the underdogs who triumph? 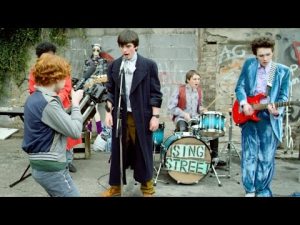 Setting it in the ‘80s was a masterstroke by the writer/director. It allows for that bit of nostalgia, that bit of distance from modern Ireland which became an altogether glitzier place. One forgets how much of a recent lived era passes unnoticed but this film director has a great eye for bringing it back. And of course the ‘80s in this part of Dublin was a rather scaled back affair, sometimes looking more like the ‘50s, for example in the party scene in the gym, where the band reverts to bourgeois suits in order to evoke a US co-ed Prom. I really enjoyed the costumes (designed by Tiziana Corvisieri) for the early band ventures, which were hybrid, heterogeneous and flamboyant, to say the least, and the heavy feminized makeup that went with the padded shoulders and the flares and the Oscar-Wilde neckties, velour baby blue suits with lavender frilly shirts, and the fly-away hair. The band videos, shot in laneways and on the Dun Laoghaire pier, are a delight in the ways they conform to the conventions of early music film clips – full of sassiness and chutzpah, and style.

The band which calls itself Sing Street doesn’t quite know what kind of music it wants to make, other than to claim it’s ‘futurist’ ,but what matters is turning the grit of life into small pearls of art, and being prepared to pay for it. One imagines the director is living out his own band leader manqué narrative. The original songs are toe-tapping rock n roll numbers, sometimes comically soulful (how easy and delightful it is to mock our adolescent selves!). But any mockery is gentle and it is a joy to see the motley band, which includes a tiny, red-headed slow developer and a giant African keyboard player, alongside its very credible 14-year old star, actually make real progress as musicians.

The relationships aim for a bit of depth and achieve it.  The very beautiful Raphina (Lucy Boynton) plays tough/vulnerable muse to perfection. Carney,  delicately, has the backgrounds emerge slowly and unmelodramatically, and the effect is very credible, with no emotional mis-steps. The stars are both kids marooned in unfriendly environments: Connor (Ferdia Walsh-Peelo) is a déclassé kid who has slid down the scale from Jesuit School to Synge St CBC and Raphina is a tough but very vulnerable inmate of a girl’s home because her dad was killed and her mother is mentally ill.  She has ambitions to become a model.  One of the best relationships is with the older brother (Jack Reynor – he won best support at the Irish Film and Television Awards) who is a drop-out who uses his experience, and failure, to guide his younger brother to local stardom. He’s a sad and cynical ‘stoner and college dropout’, but recognizes himself in his younger brother, and translates his own failures into passionate and generous advocacy of the fledgling band, using his own experience to point his sibling the way. The film may suggest his actions redeem him, but if so, it’s largely off-stage – his life in Dublin hardly seems viable.  The bullying subtext is also superbly and ethically resolved, with the brutal Christian Brother and a thug dealt with in imaginative ways in the climactic prom concert. The big final number questions the Brother’s authority, and a delegation to the bully turns belligerence (which has a prehistory) into effective cooperation. The ends are neatly tied up, even if the final scene is the purest of fantasies.

This is a film to see, especially if you need a Dublin fix. It’s been nominated for a slew of awards and has won three, including Best Director (IFTA). It may be playing in art houses, but I think it’s one that will make its way into hearts and become a stayer.

Frances is a member of the Tinteán collective.