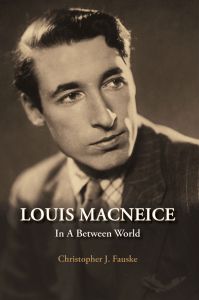 In the last decade or so, there has been a gradual reappraisal of the social, artistic and literary currents that surged through Europe during the interwar years. Simplistic images of a progressive Left locked in mortal combat with a recalcitrant Bourgeoisie are being replaced by more nuanced and difficult models of human behaviour. If the Spanish Civil War were to be seen by many British intellectuals as precursor to the horrors of the following years, then the lessons of Soviet invasion of Poland in 1920 had been conveniently forgotten until it was too late. Fauske’s biography clearly illustrates the constraints placed on MacNeice and his generation by Britain’s continuing aversion to most things European, save the delights of Paris, the Côte d’Azure and savours of a few remnants of classical civilisation.

Louis MacNeice (Belfast 1907 – London 1963) typified many of his class and generation, Irish and not British, at least until he had made the transition from Éire to work for the BBC in London during the War years. His family were of that ancient and learned Church of Ireland type from Galway, Fauske portraying Rev. MacNeice a quietly courageous Christian whose insistence on the spiritual rather than the political has him standing steadfastly between the Carsonites on one hand, and Nationalists on the other, a trait inherited, it seems, by the son.

Fauske sidesteps the usual approaches: rather than giving a simple timeline, he sets the context in which the writer worked, love of Rugby, centrality of family, tensions between his quietist philosophy and temptations offered by the then fashionable Left, the drabness of post-War life. One chapter is wholly devoted to MacNeice’s women. His mother, Elizabeth née Cleshan, died awfully when he was young, and so he was raised lovingly by his step-mother, Georgina Greer. His luck with women was poor, as wives and mistresses either deserted or ejected him. However, his sister Elizabeth, understood and succoured him in his final illness. The man, with all his flaws, is rather cruelly first made to stand naked before the reader.

Only then does Fauske offer a good discussion of the early works such as the rather peculiar Letters from Iceland (1937), written in cooperation with Auden when off on a summer jaunt to that distant island, but better described in detail by C. Osbourne’s biography of Auden. There’s an interesting account of MacNeice’s translation project of Aeschylus’ almost unplayable Agamemnon (1937), which at least attracted incidental music by Benjamin Britten.

A full chapter is devoted to the deeply moving Autumn Journal (1939), which I would place beside Auden’s poem ‘September 1, 1939’ and Milosz’s first collection, Three Winters (1937) as indicative of the European mood in the face of the coming disaster. As the Polish critic, Teresa Bruś, has recently pointed out, Autumn Journey is in form and spirit a diary or journal, providing an asylum from the outside world, repeating JP Ward’s assertion that it is ‘one of the few unremittingly good long poems in English’ (Ward 1991).

The book-length poem is as much centred on his family:

as on the times,

The crisis is put off and things look better

And we feel negotiation is not in vain –

Whilst MacNeice may have had some harsh things to say about Ireland, he returned to his father’s essential position, that the world could be a place,

Not of sleep-walkers, not of angry puppets,

But where both heart and brain can understand

The movements of our fellows …

The ensuing discussion is earnest, I felt than more could have been teased out, especially with its growing reputation in contemporary Ireland.

After the achievement of Autumn Journal, MacNeice producing features for the BBC, travelled to the USA in hope of gaining an academic position, but on his return found himself flung into the maelstrom, sharing the perils of the War years in London. But after the War, like so many of his generation he grew restless, taking the opportunity to visit to India in 1947, reporting on the Partition, and then travelling with the British Council to Athens, where he wrote the beautiful Ten Burnt Offerings (1952). On his return to the BBC, MacNeice was heavily involved in new forms of radio presentation, and notably returned to the works of Horace, which had been with him since his schooldays, writing ‘Memoranda to Horace’ as a salutation to a mentor, if not an equal.

MacNeice’s death was a miserable, unnecessary affair. He’d gone up to Yorkshire to record sound effects in a cave for the radio drama, Persons from Porlock, only to get soaking wet, catch a cold, and slip rapidly into pneumonia. Only when it was too late was he taken to a London hospital, where he died. Auden, a faithful friend, read at his funeral.

Fauske has succeeded in offering the reader an accessible initial guide to MacNeice as a man and writer, and in setting him in an interpretation of the contexts of his times and places. The book moves quite quickly through the chosen areas of discussion and links his life to the works by carefully selected quotations. However, a well-written final chapter that addresses his growing critical legacy, both in Anglo-America and on the Continent could be included in a future edition.