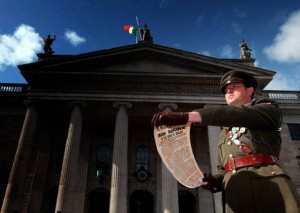 A Traveller’s Tale by Vin Ryan

Easter Sunday I arrived at O’Connell Street around 5.30 a m to secure a spot as close to the Post Office and on the northern side as I could. Whilst waiting, a bloke from Boston approached. We shared a (terrible) coffee and conversation until a Guard made us join a queue a block back, lost him in the crowd.

There were large screens set up along the route showing the wreath laying ceremony at Kilmainham Jail around 11.00 and at the front of the Post Office around 12.00 with a reading of the Proclamation by Captain James Kelleh 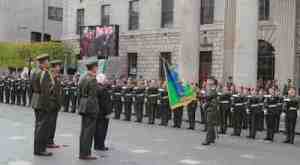 er and a prayer by Senior Army Chaplain, Fr Seamus Madigan. The prayer was preceded by the sign of the cross in Gaelic. Notable was that the crowd around joined in with both the Gaelic and the blessing. Then came the parade of the Irish Defence forces. The crowd around me were quiet, there was little conversation, no banter. When the UN Peace Keepers paraded past, they received the applause that Australian crowds give on Anzac Day. If I could identify an emotion it was one of quiet pride. When the Air Corps overflew, it was 5 Swiss built propeller-driven training planes yet the crowd applauded more than Australians would the RAAF F 18s. At the end of the parade, with the weather closing in, the crowds wandered around O’Connell Street, not wanting to leave. What I picked up was quiet pride in their nation and their armed forces, appreciation for the Rebels, no jingoism, no anti-British sentiment, no triumphalism. I found it quite moving. 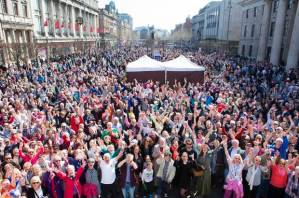 Dublin was one big fete. O’Connell St was the scene of 3 concerts, at the O’Connell Bridge end a jazz band was perched in the gaps in the Dan O’Connell Memorial. At the northern end, just before the Presbyterian Church, there was a massive rock concert. In the middle there were smaller bands, south of the Post Office. Outside the Post Office, kids were reading out the proclamations, people made speeches about the effects of the rising, one of them turned out to be a grandson of The O’Rahilly. There was a bunch of women dressed circa 1916 wandering up and down O’Connell Street singing Molly Malone. In the Rotunda in St Stephen’s Green were unaccompanied female singers, poetry readings and accompanied soloists singing traditional songs. Outside the Music Conservatorium there was traditional dancing. In the morning it was children’s dancing, later in the afternoon they had the crowds dancing traditional steps in the street, there would have been over 200 at times, some we would know from Irish Balls in the 60s, Siege of Ennis, Pride of Erin, Haymaker’s Jig. I stumbled onto another concert on Fitzmaurice Street on my way back to where I stayed that night. You had to be there to believe it, goodwill, no grog, plenty of laughter, no trouble.

Vin Ryan, Melbourne Lawyer, visited Dublin in Easter 2016 for the Centenary celebrations.  He is looking forward to the Bicentenary.