A Feature by Neasa Nic Dhómhnaill

Thousands of commuters drive over the N4 that winds through the landscape of Contae Liatroma agus Sligeach* every day, but I wonder how many take a moment to glimpse the foggy shores of Lough Arbhach and ponder the significance of the landscape. On one side of the highway are rolling mountains, harbouring ancient cairns associated with a magical race called the Tuatha Dé Danann and their ancestors. On the other side of Lough Arbhach lies the glens where Cath Maighe Tuireadh Thúaidh was said to have happened in ancient times. On the other side of the mountains lies the famous Uaimheanna na Céise, associated with other myths. Ancient megalithic monuments such as cairns, dolmens, and wedge tombs are littered across the counties touching the hearts and imagination of anyone who dares to venture through the countryside. But here, on the far side of the lough, I can almost see the ancient clans of the Tuatha Dé Danann battle the Fomhóraigh. Their war cries still echo across the marshy shores of the lough and ravens still circle in the sky. 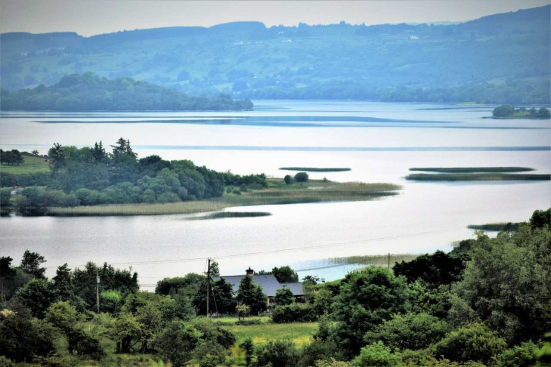 The story of Cath Maighe Tuireadh Thúaidh was recorded in several texts, perhaps the most famous being Lebor Gabála Érenn. This is the story of how the Tuatha Dé Danann came into power after the first battle against the Fir Bolg. It starts with how the Tuatha Dé Danann were oppressed by the Fomhóraigh after king Nuada lost his arm in battle, resulting in Bres taking his position as king and forcing the Tribes of Danú into slavery. Nuada is famous for his arm having been re-built by a druid and flesh having grown over it meant he could reclaim kingship. Bres was angered and rallied the war lord Balor of one eye and his army against the Tuatha Dé Danann. The legions met on Lough Arbhach and the clash of swords would have echoed through these misty glens. And as prophecy had fated, Balor’s grandson Lugh appeared with his army to defend the Tuatha Dé Danann and, with a sling shot, knocked out his grandfather’s one evil eye, killing him and rendering Balor’s army defenceless. To this day, seanchaí say Lough na Súil drains itself of water every nine years, and Balor’s one eye can be seen at the bottom of the lough.

When the battle was won by the Tuatha Dé Danann, Morrígan, the Great Queen of Battle, chanted the prophecy of the future of Éire across Lough Arbhach.

‘Peace up to heaven. Heaven down to earth. Earth beneath heaven, Strength in each, A cup very full, Full of honey; Mead in abundance. Summer in winter.’

And then she saw into the far future …

And so the infamous Tuatha Dé Danann began their reign over Éire until early AD when the Milesians invaded, banishing the Tribes of Danú to Tír na nÓg under the faerie mounds where to this day they live as the Fae or the Fairies.

Hawthorn in Autumn 2017, Lough na Súil in the background 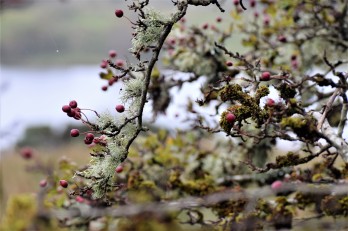 Neasa Nic Dhómhnaill is a Gael-Australian psychologist and fiction writer who is passionate about the Irish language. She researches Irish mythology, folklore and history for short stories and novels to bring back timeless tales recounted throughout the history of Ireland.

Currently Neasa is also establishing a Brisbane Irish conversation group and helping to build the Irish speaking community in South East Queensland. Her website is Teanga M’Anama (Language of my Soul) http://www.teangamanama.com/ and the Brisbane Irish Conversation group is Gaeilge ag Casadh na hAbhann (Irish at the winding river). https://www.facebook.com/GaeilgeInBrisbane/