Carly Ellis, as conductor and music-maker, and Alexander Pankhurst (Bloom) from the Sirens episode.

Bloomsday in Plaguetime, a  review of the film festival by Dermot Hodson

On 16 June each year, Joyceans celebrate Ulysses, James Joyce’s modernist masterpiece about eighteen hours or so in the life of Leopold Bloom and his fellow Dubliners. This year’s Bloomsday, like so many cultural events, was severely disrupted by the coronavirus. And yet, by moving readings and performances to online, Joyceans reached new audiences. Borders were closed around the world, but this was the first truly global Bloomsday.

Devotees of Joyce, though they were unable to gather in person, were spoiled for choice. Irish broadcaster, RTÉ, streamed William Styles’ thirty-hour dramatisation of Ulysses in its entirety. Bloomsday on Broadway offered YouTube readings from Stephen Colbert and an array of theatrical talent. David Norris, the Joyce scholar and Irish Senator, led an evening of recitals from the James Joyce Centre in Dublin.

None of these offerings captured the spirit of these strange times as well as Ulysses in Plaguetime by Bloomsday in Melbourne. For twenty-seven years, a group of actors, artists and scholars have organised an eclectic programme of cultural events in and around Melbourne in honour of Joyce and Ulysses. This year the group was rehearsing an original biographical play, Love’s Bitter Memories, inspired by Ulysses and A Portrait of the Artist as a Young Man, when COVID-19 hit. They switched tack, turning the novel into eighteen short films, one for each episode of the book.

Ulysses is loosely structured around Homer’s Odyssey, but Joyce is interested not in the epic so much as how ‘the ordinary is extraordinary’, as Richard Ellmann puts it. Odysseus wanders the Aegean in search of his kingdom, while Penelope, his wife, and Telechamus his, son, fend off suitors. Bloom, a Jewish ad-man, walks around Dublin to avoid his home, while his wife, Molly, meets her lover. Mourning his son, Rudy, Bloom is drawn to Stephen Dedalus, a troubled, young poet who searches for meaning after the loss of his own mother.

For those not directly touched by the pandemic, ordinary life under lockdown has revolved around Zoom meetings with family, friends and colleagues. Jennifer Sarah Dean, Ulysses in Plaguetime’s Director, embraced this new normal by filming twenty socially-distancing actors and splicing their performances together using split-screen. In Telechamus, the opening film, Buck Mulligan (Kurtis Lowden) and Stephen Dedalus (Matthew Connell) look every inch the housemates that have spent too long in one another’s company. Lowden captures Mulligan’s be-lathered blathering, while Connell’s Dedalus is suitably ‘displeased and sleepy’.

Technology made Ulysses in Plaguetime possible. It also provides its setting. Dedalus’s meeting with Garrett Deasy (Don Bridges) in Nestor is filmed not as a face-to-face encounter but a video call, in which a poor connection allows Dedalus to escape Deasy’s antisemitic diatribe. Conversations between the staff of the Freeman’s Journal in Aeolus become conference calls between colleagues sitting in front of their obligatory bookcases. Dedalus delivers an online lecture on Hamlet in Scylla & Charybdis. Oxen of the Sun’s revelries at Burke’s pub are replaced by raucous Zoom drinks.

Ulysses’ ‘interiorization’, as Maximilian Feldner calls it, is one reason why the book is considered to be unfilmable. Lost in their thoughts, Joyce’s characters experience images and ideas in a stream of consciousness. Screen adaptations of Ulysses have relied on voiceover to portray this interior monologue, although none quite as powerfully as Donal McCann’s closing speech-to-self in John Huston’s 1987 film of Joyce’s short story ‘The Dead’. Ulysses in Plaguetime deals with this problem by having Dedalus and Bloom (Alexander Pankhurst) speak directly to the viewer in Proteus and Lotus Eaters, as if in video diaries. Although this makes external what is rightfully internal, it is doubtful that these diaries are intended for anyone other than their own makers. 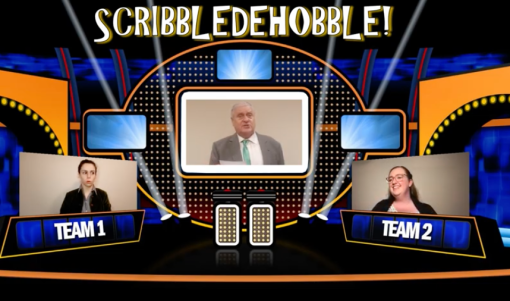 Emma Jevons and Emma Austin are quizzed by Max Gillies on minute particulars of Bloom’s and Stephen’s life and thoughts in Ithaca.

True to the spirit of the book, other episodes of Ulysses in Plaguetime have a more experimental form. In Circe, Dedalus’s grieving face is superimposed over that of his ghostly mother. Ithaca’s catechism is transformed into a rapid-fire television quiz between Emma Austen’s Jane and Emma Jevons’s Joyce. The standout performance comes from Carly Ellis in Sirens. Playing eight characters in one Zoom gallery, she sings, conducts, plays and beatboxes her way through the book’s most musical episode, while a ruminating Bloom looks on.

Max Gillies, the veteran comic actor, weaves these disparate films together as their principal narrator. He sits before a bookshelf, which with its volumes on Paris, Shakespeare, mythology and Jewish history, looks like Joyce’s own. But Gillies sides with the reader, throwing amused and perplexed glances at the camera as he works his way through Joyce’s difficult book. Gillies also shows his versatility by playing multiple characters in Wandering Rocks.

Molly, vividly portrayed by Annabelle Tudor, has the final word in Penelope. Arms folded, as if on a Zoom call with a confidante, she talks about her lover before her thoughts turn to Bloom, their courtship and engagement on Howth Head. ‘He said I was a flower of the mountain’, she recalls, as a dog barks off camera. This moment serves as a reminder of the extraordinary ways in which ordinary life under lockdown has carried on.

The sole reference to Australia in James Joyce’s Ulysses is when Leopold Bloom gazes approvingly at a glazed apple on a cart. Given the time of year, he assumes that the fruit must be Australian. With Ulysses in Plaguetime, Melbourne has secured its place on the Bloomsday globemap.

Dermot Hodson is a professor at Birkbeck College, University of London, where he directs the SPACE seminars on politics and the arts.

The films are available to view, along with more information about each and the episode dramatised.