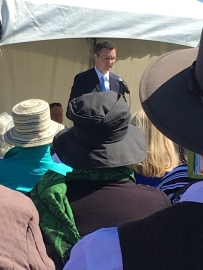 A crowd of about 250 gathered at the famine Rock in Williamstown on Sunday 28 October 2018 to mark (for the 21st time) the arrival of 4 000 young Irish girls from workhouses in Ireland who arrived in Australia between 1848 and 1850 under the Earl Grey Scheme.

The day was especially beautiful – the music of Cora Browne and Felix Meagher, blue skies, glittering water, hooting boats. The theatre of maritime arrivals and departures on Port Philip Bay. One can only hope that 170 years ago, arrival spoke promise of better times for the girls.

Val Noone, MC, opened with these words, in Irish and English:

On a hill at Pulla, four kilometres south of Dungarvan in County Waterford, near the turn off to An Rinn, just by a pub called An Seanachie and another one called the The Marine Bar, is a famine graveyard. 150 years ago mass burials took place there. Our friends Ted Casey and Ailbhe Ní Neachtain from Ring took my wife and me there when we first went to Ireland.
One of the very few songs of the Famine years, ‘Na Prátaí Dubha’, The Black Potatoes, speaks about that graveyard as a mountain graveyard. Mary Drum from nearby Ballynagaul wrote the song which begins, “The black potatoes that sent our neighbours scattering, / That put them in the poorhouse and over the sea! — / In the Mountain Graveyard lie hundreds of those struck down.”
The two lines of Irish poetry on the larger plaque for this monument are taken from Máire’s poem. They read:

God never planned this work:
Poor people put out in the cold and set wandering.

Those who were scattered to the New World found elements of Divine Providence in their fate, but Máire’s words are in contrast to the 1847 remarks by Charles Trevelyan, secretary of the British treasury and commander of famine relief who said that the Famine victims were ‘suffering from an affliction of God’s providence.’ Máire Ní Dhroma’s lines suggest that the disaster should never have happened in the first place: she was a liberation theologian before her time.
Famine was not inevitable back then and it is not inevitable in 2018. And dispossession of Aboriginal land and stolen generations are not inevitable.

Val invited Boon Wurrung elder, Gheran Steel, to do the welcome to Country.  After an unusually educational welcome to country,  the chief guest of the day, Patrick O’Donovan TD (Minister of State in the Irish Government, and a Limerick man) spoke of the decimation of population in Ireland, and its global impacts, making links with the contemporary refugee crisis. He went on to talk about the contribution such women made to the cultures they encountered. He half joked that Australia without the Irish was unthinkable, unspeakable – and unendurable.

Many famine descendants were present, and they and the visiting dignitaries and others placed flowers at the base of the stone, and called out the names of their progenitor Orphan Girl.

After this ceremony, a Round Table was held at Williamstown Town Hall at 5pm. Chaired by Professor Ronan McDonald,  historians Associate Professor Di Hall and Dr Val Noone, and human geographer, Dr Fidelma Breen, addressed the questions of the impact of the Famine on Irish-Australia, implications for the future and the gaps to be addressed in research.

Val spoke of an eerie silence on the subject of the famine, and audience members speculated on whether this was shame, survivor guilt or other mechanisms at work. A panelist, Fidelma Breen, suggested the psyche of migrants past and present was worth further research.

An initial response to the arrival of these migrant women was an ecumenical appeal which quickly raised money to support them. Despite this, Di Hall has documented rising levels of discrimination in advertising, using such slogans as ‘no Irish need apply’ or ‘Protestants only’ and cruel descriptors of them (‘dirty’, ‘liars’ and they were alleged to cook everything in the one pot). Nonetheless, despite these attempts to freeze them out of jobs, the girls quickly found work in domestic service. Hospitals recorded their poor health: they suffered from rickets and malnutrition, conditions that lasted their entire lives.  Nonetheless, those who arrived in Australia tended to be chosen for their robustness, and compared with similar cohorts in the USA,  they tended to be stronger physically as they had to pass assessments that they would survive the arduous journey south.

Discussions of the monumentalisation of the Great Famine around the world gave an opportunity for the widow of Tom Power, Trish, to pay tribute to her late husband, who had been the powerhouse of the Sydney Famine Memorial, and also for Perry McIntyre to talk about how the Famine Memorial came about in Sydney – in response to a suggestion made by President Mary Robinson.

Undoubtedly, many left with questions to pursue and new ideas to think about.