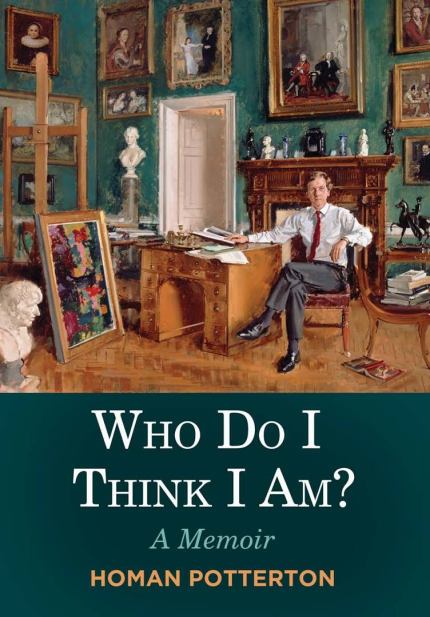 ‘Who do you think you are?’ in its original format, is a rhetorical question, used as a ‘put down’. Its function is to enable a superior authority to undermine the confidence and even wellbeing of the ‘underling’ to whom it is directed.

Of course, such an understanding is no longer the only valid one. Thanks to the highly successful and popular television program, the former rhetorical question ‘Who do you think you are?’ has reverted to being a straight forward, genuinely information-seeking query. Unlike the rhetorical version, there is an answer just waiting to be expounded!

In titling his memoir ‘Who Do I Think I Am?’, Homan Potterton, erstwhile director of the National Gallery of Ireland (NGI) (1980 – 1988) is drawing on both interpretations. It is presented as a genuine question requiring an authentic answer – he is going to tell us who he thinks he is – but there is also an element of the censorious rhetorical format, just who did he think he was. As the poet, Paul Durcan opined in his poem, ‘The National Gallery Restaurant’, Who does Homan Potterton think he is – Homan Potterton?

This text is not presented in a narrative style in which the author invites his readers to help him to explore who he is, or even bear with him as he undertakes some sort of personal odyssey. Homan Potterton is highly cognisant of his ancestry, having published an extensive (if not exhaustive) record of his family’s history – Potterton People and Places – which traces familial ties and landholdings of the Pottertons and in-laws descended from Thomas 1 of Rathcormick (1643 – 1718) who settled as a tenant farmer in Co Meath to the present day. The Pottertons were Anglo-Irish, members of the Church of Ireland – several were C of I clergymen – and although they didn’t exactly live sumptuously, they were spared the endemic poverty of the Irish tenant farmer, many of whom were displaced by the draconian Penal Laws.  In time of course, the Anglo-Irish class themselves became impoverished, but there is little evidence that they ever lost their sense of belonging to a distinctive Anglo-Irish social strata made famous by a literary subculture which included Sommerville and Ross, the founders and members of ‘The Celtic Twilight’ movement including W B Yeats and Lady Gregory, Elizabeth Bowen, and William Trevor. One can only conclude that the answer to the non-rhetorical) question of ‘Who do I think I am?’ has been answered even before he puts pen to paper.

In fact, the story of his privileged, (if impoverished) stable, happy childhood as the youngest child in a confident, rumbustious, socially aware Anglo-Irish family in 20thcentury Ireland, told in the delightful ‘Rathcormick: A Childhood Recalled’  (Random House Australia) confirms that his career trajectory was going to be anything but ordinary in spite of his observation that:

The road I had taken from a childhood in County Meath and schooldays in Kilkenny and Dublin to the director’s office in Merrion Square had in retrospect, been quite straightforward and what one might expect of any museum director.

The fact that he was appointed to be the director of the major art gallery of Ireland (NGI) at age 36 (when such an appointment was usually a reward for long and diligent service in a more minor role) would seem to contradict this observation.

There were a myriad of obstacles in his youth, which would normally have mitigated against his meteoric rise through the art communities of England and Ireland to a position of such prestige and influence. He was the youngest son of a Meath farmer and though his family was a member of the Irish ‘gentry’ they were hardly wealthy. He belonged to the influential but powerless ‘elite’ social class of the Anglo-Irish and furthermore was a Protestant, educated in Protestant schools in a predominantly Roman Catholic society. However, some of the precociousness he was to display in his later career was already evident in the schoolboy Homan. In spite of being classified as ‘a colourless personality’ by his headmaster Mr Tate, (information he acquired by reading a confidential report!), a fellow student provided a very different assessment of the young Potterton:

He said he remembered me taking to the stage in the vast (and crowded) Metropolitan Hall in Abbey Street representing Mountjoy (his school) at a huge inter-schools debate, and how he had been staggered that I had such confidence. (p 2)

Indeed although only a few pages of his memoir concerned itself with his schooldays, there is enough evidence to suggest that his academic achievements were sound and he demonstrated a healthy inventiveness initiating schoolboy pranks. He showed further inventiveness in organising a three-month-long stay with a French farming family and although the family life itself was simple, on numerous visits to Paris and other culturally significant places and with the help and encouragement of some long lost cousins, he became acquainted with a very different cultural milieu to the one he had experienced in Co Meath.

And from that time on, as far as I was concerned, it was: County Meath … goodbye.

A few more relatively carefree years at Trinity College Dublin (which he didn’t really enjoy), some further post-graduate study in Edinburgh, and two years as a temporary cataloguer in the National Gallery (of Ireland) equipped him for a ‘real job’ as ‘Assistant Keeper’ in the National Gallery in London, a position in which he thrived and where he established himself firmly as an art historian in the rarified art world of England and Ireland. His career trajectory had taken a more conventional turn.

As does his memoir. He quite diligently sets out from this point to answer the non-rhetorical question which is the title of the book, ‘Who do I think I am?’and inform us of just who he does think he is.

Potterton has a very accessible, anecdotal style of writing, effortlessly bringing the readers with him as he recreates for them the world he occupies but which is an alien one for them for the most part. This was very evident in Rathcormick: A Childhood Recalled. His greatest strength is indubitably his capacity to create a page-turning narrative out of both the mundane and exotic. However in his memoir, he reverts several times to quoting large slabs of text verbatim from his diary. As for the most part, we readers have no clue as to these luminaries – or otherwise – with whom he is dining, or partying, or attending trivial or important meetings; we find ourselves being asked to digest litanies of names, issues and activities (tea anyone?) which are inconsequential to us. But perhaps that is the point. He is in fact, answering his own question and establishing his credentials to be considered a person of some standing and significant status in the society in which he moved, despite his youth and his rather abrupt departure from his responsible and often onerous position.

And he did find the position onerous. The Gallery was chronically short of money and the Irish Government not very simpatico to his plans and schemes. These included a revamp of the Gallery restaurant. Significantly, when he took over as director of the Gallery, its restaurant catered for members of the civil service and of the Dáil, who occupied neighbouring office spaces and who were certainly not known for their gourmet cravings – meat and three veg were de rigueur. Homan was having none of such plebeian tastes and completely revamped both the restaurant and the menu, effectively ejecting the civil service and establishing one of Dublin’s favourite eateries to this day.

Homan soldiered on despite the obstructionist tactics of recalcitrant Ministers (including the then Taoiseach, Charlie Haughey) and government minions, not to mention economic recessions, to establish the groundwork of the highly successful and highly regarded NGI of today. 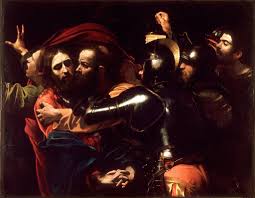 There were many successes, however, and a few failures. Two in particular rankled. The anguish he still feels for his failure to recognise the Dublin ‘Carravaggio’ when it still hung in the Jesuit house in Leeson St until it was ‘discovered’ by a gallery restorer a few years after Homan’s tenure as director, is evident in his remark ‘How could I have missed it’ (p 187) and his rather abject admission to carelessness. ‘I did not do that (research the painting), and I have no excuse’.

His other ‘failure’, however, is a tale of derring do, surely worthy of a book in its own right. The final two chapters are taken up with detailed descriptions of Homan’s dealings with Sir Alfred and Lady Clementine Beit, owners of Russborough House and a ‘priceless’ art collection, which was subjected to not just one but two daring, highly sophisticated art heists. In the first heist, nineteen paintings were stolen (having been removed from their frames), but the perpetrators were apprehended and the paintings retrieved within a week. 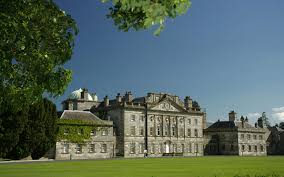 The second heist took place in May 1986 when Martin Cahill, a notorious Dublin criminal, stole eighteen paintings (including a Goya and Vermeer) of the collection and sent a ransom note to Potterton.

Although warned not to contact the police, Potterton played a leading role in what was to be a police sting in an effort to regain at least some of the paintings.

Potterton’s account of his life-threatening involvement in the police operation is as good a story as any fictional police procedural and confirms his considerable gifts as a writer —  the narrative is a page-turner! Alas the operation was not successful. All the paintings were eventually recovered in Antwerp in 1993, seven years after Potterton’s ransom escapade and five years after he had resigned as director of the Gallery. But he did achieve one of his dearest ambitions, to have the Beit collection gifted to the Irish state. A recently refurbished ‘Beit Gallery’ in the NGI now houses the remnants of the collection – several paintings and sculptures have recently been sold (by Christie’s) to pay for the maintenance and upkeep of Russborough House, also gifted to the nation by the Beits.

Perhaps the answer to Potterton’s question of  ‘Who do I think I am?’ is to be found, not in the litanies of celebrities/lunches/public speaking engagements and esoteric discourses about catalogues and colleagues, but in a far more obvious place – the dust cover of this handsomely produced book which features a portrait of the director of the NGI looking relaxed but nevertheless alert in his director’s office. The portrait (by Andrew Festing) is also reproduced in the main text (between pages 86 and 87) (see above). And here is, as is always in Homan Potterton’s knowledgeable view of great art, a story embedded.

I asked Andrew if he would like to paint me and he was encouraged when I said I did not want a typical ‘boardroom portrait’ but a conversation piece. I showed him my office and said it was the setting I wanted. ‘Are these all your favourite pictures?’ he asked. ‘Not at all,’ I replied, they are just what I found in the cellar to fit the hang. I would like you to show the room as it is hung, but in your painting could you insert into the frames as they exist representations of pictures that mean something to me?’ He was immediately gripped by the novel idea and very soon his easel was installed in my office. (p 184)

There follows a description of the paintings, some of which were miniaturised, and the furniture. The Director was very pleased with the result.

Everything (else) in the picture, including the books meant something to me, and Andrew showed all exactly as I wanted. (p 185)

It seems fitting that the answer to his question ‘Who do I think I am?’ is to be found in this delightful, charming painting. He leaves us in no doubt that he is above all, his own man.

Elizabeth McKenzie is a former editor of Tinteán