Review of Bloomsday 2018 by Juliette Hughes-Norwood 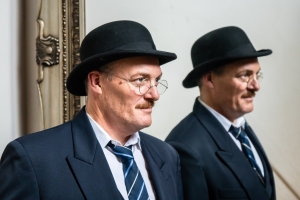 I went on Bloomsday to see the Bloomsday in Melbourne 2018 performance and it was the best yet. To understand just how good this year’s performance was, it is necessary to realise just what they were attempting.

If you were to listen to a lot of people who should know better (including a surprising number of people who read and write for a living), Ulysses is almost impossible to read and according to Sam Jordison in The Guardian ten years ago, not worth trying. He singled out Chapter Fourteen: Oxen of the Sun for particular odium but extended his displeasure nearly to the end:

How an intelligent lover of words could discard so much of value is a mystery to me and must obviously be to the Bloomsday people. Given all the hostility and apathy it was therefore particularly courageous, as Sir Humphrey would say, for Bloomsday in Melbourne to decide to tackle Oxen of the Sun this year. And they tackled it with joy, enthusiasm and skill.

The chapter concerns itself with birth, reproduction, life and death. It is set in Dublin’s Holles Street Maternity Hospital. While Mina Purefoy groans in labour, delivering her thirteenth child, Leopold Bloom sits in a waiting room and surreptitiously avoids drinking with Stephen Dedalus and a group of boisterous medical students (a trio in this play, and many more in the novel). As they discuss the ethics of contraception, abortion, and the meaning of life, Joyce travels through a chronology of English literary styles, (at least 34 of them). Holy Cow! tackles most of these.The language style begins at a stage that is before conception: Joyce begins with the invocation to the sun god Apollo, the bright one, the light one, source of life. Then the book chants the triple gathering call, quoted and so misunderstood above:

Now how hard was that?

All right, it’s not Enid Blyton: the chapter is full of voices in varying language styles demonstrating and celebrating that English is itself polyglot. To speak it is to voice the history of human speech for millennia. The danger is that one can enunciate without meaning; the rise and fall of the voice, however well elocuted, can be as sterile as Siri if the true cargo of meaning is not carried in the mind of the speaker.

So, though the chapter begs to be read aloud, it is not easy to stage or to cast. The challenge of the Bloomsday in Melbourne project is, year after year, to find people who can speak Joyce lucidly, in a way that demonstrates and conveys full, embodied comprehension. When that is done well, then the language itself shines and deepens one’s perception of the reality it conveys; minds are opened, understanding is achieved. Holy Cow! had ten actors who, under insightful direction from Jennifer Sarah Dean, did precisely that for us.

The production itself was a feast of clarification: one particularly good idea was literally to unpack the language and its associated conceits from labelled trunks. In the Second Narrator, played with earthily strong good humour by May Jasper, we were presented with a wryly comedic acknowledgement of the task’s weight as she hauled the trunks across the performance space.

The First Narrator is a priest, magisterially played by Paul Robertson, owning the space and the language, ordering the first narrator around, representing the censorious voice of the church, setting the tone of Joyce’s prudish critics, both from religion and academia:

Mr James Joyce … has not treated our British literary heritage with the reverence it deserves. He has dared to attack the teachings of our Holy Mother the Church.

As the conversation winds through, Mina Purefoy’s (Liza Dennis) anguished cries punctuate. Again, in a good acting and directing decision, the cries were not high-pitched screams but low, grinding moans, counterpointing the high language with genuine Joycean verisimilitude.

The audience was affected by this; the moans resonated as a sporadic reminder of the reality embodied in the words. Each character had to make a tilt at the prose, tackle the semantics and carry the meaning in their voices and bodies. The great thing is that they all did, and some did it really well.

Matthew Connell stood out as Stephen Dedalus. All the actors were excellent, but one couldn’t help thinking, as he surprised again and again with a kind of true eloquence, that he is going to be famous one day. Such ability is rare. When he had to say:

the sheer clarity of his delivery forced one to understand that he at least knew what he was saying, so the audience at the least took the impression of the words, as with T.S. Eliot’s objective correlative. There is an unassuming confidence in his bearing that allows him to be both a strong lead and strong ensemble player.

Hunter Perske (Bloom) and Bridget Sweeney as the Nurse were also impressive. In particular I loved their gracious dialogue in the early part, rendered in late Anglo-Saxon, translated but retaining the rhythms and alliteration. The effect emphasised the recurring theme of bereavement and loss, while the medical students roar their defiance and denial with counterphobic vigour. Buck Mulligan, Costello and Dixon, played confidently and intelligently by Mitch Edwards, Timothy Ian McMullin and Johnathan Peck, were like boisterous bouncing balls around the performance space. In Holy Cow!, every aspect was balanced with its counterpoint: pathos with comedic bombast, prolixity with wordless groans, and irony with genuine feeling. The ending was incredibly moving, reminding us of Joyce the man and the writer.

It was a tour de force. I can’t wait for next year.

Juliette Hughes-Norwood is a reader, broadcaster and Joyce Geek.