For ten years, Tinteán has been an influential contributor to discussions on Australian Irish heritage topics. Between 2007 and 2012, it was a handsome glossy quarterly magazine of 40 pages or more, edited by Liz McKenzie and an editorial team. Its genealogical forebear was Táin, edited by Val Noone and his family and a team of volunteers from 2000 to 2007.

After five years of quarterly publication, increased costs meant that the hardcopy version could no longer be produced and Tinteán went online in 2012. The bonus was that it could be produced free to subscribers and casual browsers every month rather than quarterly. Our records show that there is an average of 4 000 ‘hits’ to the site each month from Australia, Ireland, the US, Britain, Canada, New Zealand, the Pacific, indeed from far flung places such as Taiwan and Alaska!

Our commitment to giving a voice to Australian Irish issues is expressed in the home page of our website:

Tinteán is the online monthly magazine of the Australian Irish Heritage Network (AIHN), publishing articles of interest to the Irish diaspora in Australia. The magazine seeks to cover cultural and historical items, academic discussions, book and theatre reviews. It makes occasional incursions into the world of sport, music and health, with contributions of interest to both the Australian Irish community and more recent migrants.

Now, a decade after it first appeared Tinteán has come to another point where hard decisions have to be made. This is partly, though not totally, due to the decision by Liz that family and personal matters require her to step back from her central role in the magazine, though happily she will be on call to the editorial collective. 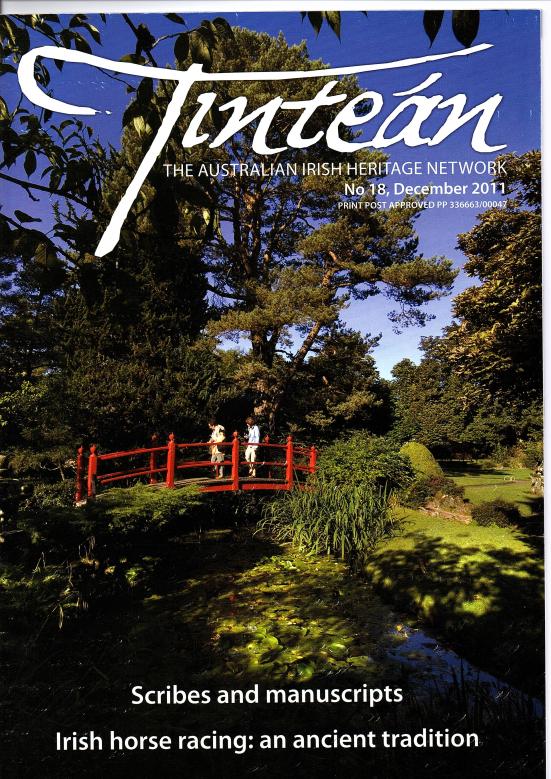 The members of the editorial board have decided that Tinteán online will now be published every second month from March 2018. We will continue to publish cultural, historical and literary material, though we would like to be able to expand our range of articles. For this reason, we make the following requests to our readers:

The members of the editorial board and all who have been involved with the magazine over the past ten years take this opportunity to thank Liz McKenzie for all the work she has put into the magazine in that time – writing, commissioning, editing, reading and seeking fresh ideas. We have no doubt that our readers throughout Australia and further afield will join with us in thanking her for her contribution over these years.

The Tinteán Collective believes that the magazine is a valuable part of the cultural life of the Irish diaspora in Australia. If you have something to say, some opinion you would like tested, please get in touch with us at info@tintean.org.au We look forward to your ongoing support in the years ahead.