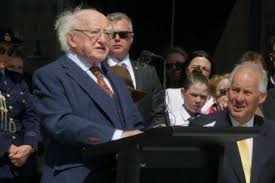 A Dhaoine Uaisle, a Chairde Gael,

What a great honour it is for Sabina and me to be with you today at the unveiling of this most magnificent work by the Irish sculptor Rowan Gillespie, these poignant statues commemorating the thousands of women and children who arrived on these shores in chains, after a long and tortuous journey. 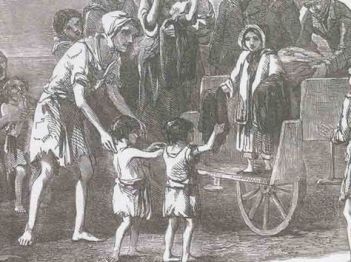 One hundred and seventy years ago, famine raged through the fields of Ireland. ‘Black ‘47’ was the nadir of the Great Hunger, An Gorta Mór, when the peasant population of Ireland was literally dying in the ditches.

Today I recall that terrible time in our nation’s history because not all who suffered died. Over a million people did lose their lives to hunger and disease, but over 2 million were forced to leave their native land. The majority did so out of necessity, fleeing poverty, seeking a new life and a new hope in a new land.

In Perth last Monday, I recalled over four thousand young women and girls who, faced with a bleak outlook in famine ravaged Ireland, were transported voluntarily, it is claimed, from Ireland’s workhouses to the Australian Colonies.

Evelyn Conlon, in her wonderfully researched and written historic novel Not the Same Sky recounts the voyage of the Thomas Arbuthnot which left Plymouth on the 18th of October 1849 with what was described as ‘a cargo of Irish girls’ under the care of surgeon-superintendent Charles Strutt, from whose diaries we have gained such an insight into the reality of what these women experienced. The ship reached Botany Bay in February 1850.

Those women were brought to these shores as part of a scheme instigated by Earl Grey, Secretary of State for the Colonies, which was designed specifically to attract women between the ages of 14 and 20, women who were needed to address a gender imbalance that had emerged in the Australian Colonies.

The mindset that would devise such a scheme is in itself something to ponder. Is there not something deeply unsettling in the attitude of the then imperial social engineers, such as Earl Grey? Having failed to attract a sufficient number of female settlers, he pounced on the opportunity of Ireland’s famine to pluck young, desperate women from the most wretched of conditions, separating them from any surviving relatives they might have had, removing them from the land of their birth and transporting them to the other side of the planet. While they are described as volunteers, it is worth considering whether they had any choice at all. With starvation and disease ravaging the land, with their daily reality of wretched workhouse conditions, I wonder, could they have really opted not to come?

Today we are recalling another specific group of women who were transported from Ireland and Britain as punishment, victims of a harsh judicial system that valued property above people’s lives. The crimes for which they were transported were often petty. The theft of food or a few coins, a watch or a shawl, stolen to try and sustain a starving family; desperate acts of destitute individuals.

Among them were the 25,000 women, nearly half of them Irish, transported in the dark holds of ships on a 16,000-mile journey to the other end of the Earth. These Mná Díbeartha, Banished Women, left their homeland in the most desperate of circumstance. Thirteen thousand of them arrived on the shores of Van Diemen’s Land alone, or with small children in tow, facing an unknown country and unknown future, with little hope of ever seeing their families and native island again.

Rowan’s sculptures have their companion pieces in Dublin and Toronto. Unveiled on the 150th anniversary of the Great Famine, in his Dublin sculptures Rowan gave a face to the suffering of the many starving people who departed in ships from their homeland. The 160th anniversary of Black ’47 was commemorated in Toronto with the unveiling of Rowan’s depiction in Ireland Park of those who arrived there in hope in a new country.

Here in Hobart, commemorating the 170th anniversary of that dark time, Rowan did not need to imagine the women who were forced to make the perilous voyage. For he could meet them. I was particularly moved to learn that the models for Rowan’s sculptures are the descendants of some of these banished women, some of whom are with us here today.

It shows a maturity and depth of understanding in coming to terms with Australia’s origins that Australians are now confident in transecting the multiple strands of their identity, including their convict ancestry. To find a convict ancestor is no longer a matter of shame but can be cause for reflection and indeed celebration.

Because many of these destitute and down-trodden women triumphed. These women and young girls and the choices they made, shaped the world in which they lived. They were the founding mothers of Modern Australia. And so, it is fitting that we should remember them; and that we should celebrate them.

Of course, their arrival in Hobart, carrying the label of convicts, was not immediately a cause for celebration. Though no doubt many were glad to be back on dry land after months spent at sea.

But for those who arrived with children, they had to suffer first the pain of forced separation as the infants were taken from them and incarcerated in conditions that often proved fatal.

The women themselves had to survive their own incarceration and beatings, long hours of labour and harsh conditions in which they were housed. And they had to endure assignments to masters as bonded labour.

In those early years, convict labour was a main resource chosen as a means to build what were the new Australian Colonies. Convict women made clothes, cleaned and cooked for the population of colony, and became the mothers of this new nation.

The resistance, resilience and dogged determination they needed to continue to survive and to build new lives seem incredible and are to be admired. Their landing in Hobart town was indeed their first footsteps towards a freedom from hunger, dispossession and the poverty that went with vagrancy, but it was also their entry into a particular form of bondage in terms of incarceration and punishment.

We should never forget those who did not survive to mother a new generation; many did not survive the arduous voyage; many others who did were broken by abuse and the troubles they encountered and by the cruelties and humiliations imposed upon them. We now have the means to remember them too and to recall their suffering and sacrifice.

That we are able to do so, we must note, has a certain degree of irony for we must be grateful to the colonial administrators who recorded so meticulously the details of every woman and child arriving on Hobart’s waterfront. We are grateful to the historians, archivists, archaeologists and others who have trawled through those records to bring us the stories of these women. Their work is invaluable in aiding our understanding of the women’s lives and the circumstances under which they came here. They have rescued these women from obscurity and restored their historical importance to both our nations.

I have spoken many times of the ethics of memory and the importance of not setting boundaries on what we recall. This has been useful in our own Irish experience of reflection on the Famine, on our colonial past and on the choices that were made, and not made before and after the independence of the Irish State. It has also been important in our effort of recent decades to forge a better future on the island of Ireland from a legacy of division and bloodshed. Exploring the less palatable parts of our history has, I believe, allowed us to come to a fuller understanding of ourselves.

The women and children we are remembering today were just some of the victims of a brutal and brutalising imperial regime, that in many respects cared little for human life or dignity. They were not the only victims of course. We need only think of what befell and what was perpetrated upon the Palawa, those who occupied Tasmania for tens of thousands of years before the arrival of the Europeans; original occupants who were brought to the brink of extinction in the 19th century.

They are also victims who should be remembered. We should recall that it was within this ruthless and, in many ways, inhumane environment that these women and children were incarcerated.

I take this opportunity to congratulate the Project Team who have worked to bring their vision to fruition. John Kelly, Professor Lucy Frost, Jo Lyngcoln, and Carole Edwards united their various skills and expertise over a number of years to achieve their goal of telling this untold story. Their reward is this monument; one that records not just skill and art but one that does so while communicating a real passion.  I congratulate and thank you all on a job so beautifully executed.

I also wish to thank Hobart City Council, the Tasmanian State Government and all who supported this project in any way.

We are defined as a people by what we choose to commemorate. In choosing to commemorate the convict women, the city of Hobart has also chosen to acknowledge and recognise its convict past, and to celebrate the indomitable spirit of those convicts who survived and then thrived to build a new home.

These sculptures, let us remind ourselves, also make common cause with the suffering of migrants in our times. They should remind us that the trauma of displacement and forced exile are not experiences confined to our past, but are the lived experience of millions around the world today, including many who now call Australia home.

Migration is part of Ireland’s past and our present and defines our nation. We often recall the men and women who achieved success or notoriety. People such as Edmund Dwyer Gray, (no relation to Earl Grey), who was born to an Irish nationalist family in Dublin in 1870 and went on to become the Premier of Tasmania in 1939; But we also recall the millions who left Ireland to lead quieter existences, trying to survive and trying to make a better life for their children and for their communities.

We are a migratory people so much more than a sedentary one.  It is reflected in every aspect of our being.  It places responsibilities on us too, as to our response to contemporary migration.  The Irish have always been leaving, returning at times to leave again.  There are more than 70 million people worldwide who can claim Irish ancestry.  Ireland’s relationship with its diaspora is enshrined in our Constitution which states that “the Irish nation cherishes its special affinity with people of Irish ancestry living abroad who share its cultural identity and heritage”.  Among this diaspora are the descendants of the Irish convict women who left unwillingly but whose legacy we celebrate today.

In recalling those special Irish women and children that we remember today, we are acknowledging them as a part of both our nations, I am reminded of the Connemara Cradle Song, popularised by ballad singer Delia Murphy, wife of Ireland’s first Ambassador to Australia:

May no one who’s dear to our island be lost,
blow the winds gently, calm be the foam,
shine the light brightly and guide them back home.

Thank you again to all those who united in common cause to give us this monument, this memory.

One thought on “Famine Memorial Hobart”