The next meeting of the Irish History Circle will feature:

1. The organisers of the IHC: Open topic. 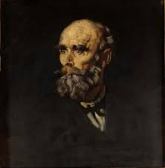 Further information: Why do we hear so little about Michael Davitt’s place in Irish history? When Davitt returned to the country of his birth he was a force to be reckoned with–as one of the most influential leaders of Ireland’s independence movement, and especially when it has been said that Davitt represented a much greater idea than Parnell.

Our people have bowed to might, but they never have acknowledged the right of making land private property. In the old tongue they have cherished the old truth, and now in the providence of God the time has come for that faith to be asserted. …

Whilst in prison, Davitt came to his oft quoted conclusion that, ‘the land question can be definitely settled only by making the cultivators of the soil proprietors.’ With that as the ultimate aim, the ‘Three F’s’ (Fair Rent, Fixity of Tenure and Free Sale), became the foundation of The Land League.