is only in recent years that recognition has been given to the many Irishmen who lost their lives in the Great War. Credit has been slow in coming, as it has for the members of the Royal Irish Constabulary, the RIC. These were Irishmen who found themselves
in the sights of the guns of their fellow countrymen in the War of Independence. One writer who in his plays and novels has put a powerful case for the rehabilitation of both groups is Sebastian Barry.

In The Whereabouts of Eneas McNulty, the eponymous central character is a lifelong wanderer, driven from his home town of Sligo after returning from service with the merchant marine in the Great War. The new nationalist elite do not welcome him and he finds himself even more offside when he joins the RIC. Under sentence of death from his fellow countrymen, he sets off to wander the world, returning infrequently and furtively to his native town, only to discover on each occasion that the masters of the new orthodoxy have not forgotten his former avocations.

In one of those return trips, he encounters the young Roseanne Clear, the central character in another Barry book, The Secret Scripture. The title of the book comes from the Tom Kettle poem where he tells his daughter that the men in the trenches were fighting for ‘the Secret Scripture of the poor.’

The action of the book is contemporary, as Roseanne, now a centenarian ‘only a thing left over, a remnant woman’ writes the record of her life in old copybooks and hides them under loose floorboards in her room in the Roscommon mental hospital. Her father was an RIC man, though she seems to have written that out of her mind and she is the victim of that happenstance as of the too-eager ministrations of the local priest who persuades her that her marriage to Tom McNulty, brother of Eneas, was invalid, never happened.

Jack McNulty, another member of that family, is the central character in the 2014 book The Temporary Gentleman. He joined the British army during the Hitler war and was given temporary commission because of his proficiency as a bomb expert. Now, isolated in Accra on the coast of Ghana, he reflects on his life and the fleeting nature of his status as a toff.

Between those books came A Long Long Way, the title obviously derived from the song favoured by the Tommies who went to war remembering Tipperary – not the Irish county, by the way, but a euphemism for a region of temporary paid entertainment for young men in turn-of-the-century London.

Unlike the other two books, this one is set in Dublin around the time of the Rising. The centr

al character has the quintessentially Dublin name of Willie Dunne. Like many young men all over the old Empire, he eagerly signs up for service to defend poor Belgium and its reputedly much violated nuns. His father is superintendent in the Dublin Metropolitan Police, the DMP, the group that represented law and order in the city in those times. He is tormented by the harshness his men had to use against Jim Larkin’s strikers in 1913, but does not tell his son that four strikers had been killed in that confrontation.

That book was a finalist for the 2005 Man Booker Prize (won by John Banville’s The Sea) as The Secret Scripture was for the 2008 prize. Three years after that last, he made the longlist for On Canaan’s Side in which the central character is the sister of Willie Dunne, now an old woman living on the charity of friends, having spent much of her life in America.

And so we come to Barry’s latest book, Days Without End, where he is back again with the McNulty family, though the relationship with the same family in his earlier books is not clear. We are introduced to another Tom McNulty, who likes to be called Thomasina, because he is not entirely clear about his gender. He left Sligo in Black ’47 at the age of 13 and managed to survive the coffin ships, joining

… people that were so hungry they might eat each other in the holds. The captain hisself   he died of fever. When we reached Canada we were a ship without a steward. Into the fever sheds with us and that’s where hundreds died. I’m just writing all this down. The    point is, we were nothing. No one wanted us. Canada was a-feared of us. We were a  plague. We were only rats of people.

Tom teams up with another stray, a lad about his own age named John Cole, and they find that they can survive by dressing up as dancing partners for boisterous but well-behaved miners. When Cole becomes too tall to pass as a girl, they join the army to fight the Indians. Demobbed and back in civilian life, they return to the stage, before joining the Union army in the civil war. 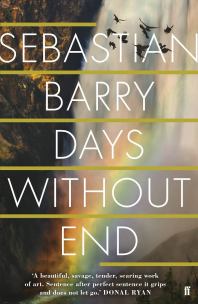 Much of the book describes actions in the fighting against the indigenous tribes who used to have the plains of middle America to themselves before the white man came. Those encounters and massacres are exceeded in cruelty only when the north and the south confront each other a few years later. There is little spared in the telling and the result is not for folk who declare themselves squeamish.

Through it all there is love and loyalty. The love is unusual in stories from this time. Tom and John Cole sleep together, a circumstance that would not have been unusual at a time when beds were scarce and reused. That they were lovers is made clear in one short sentence. Words like gay, queer or homosexual were not in the lexicon of the day and no one commented on their situation. A young Indian girl, captured by the army and taught to read and write, becomes friendly with Tom and Cole. After being demobbed, they pass her off as Cole’s daughter and because Tom sometimes dresses in women’s clothing, they seem to be no more than an unusual family.

Tom is the narrator throughout and it is clear that he is speaking long after the events he is describing. His grammar is sometimes uncertain, but there is little wrong with his recall or his eloquence. He can describe ‘mountains with their Jewish caps of snow’ or ‘fences going over a turmoil of hills’ or ‘two privates as dead as poked-out winkles.’ You get to love too his elegant turn of phrase, understatement providing more eloquence than a rattle of words. ‘If Maryland ain’t a pretty country, God’s a girl.’ Or his description of the wife of their commanding officer who is a perfect Boston lady and ‘ought to have been a preacher had she not been cloven.’

This is writing of the highest quality, the kind that reminds you that there are more grades of prose than there are abilities in your local golf club. And as you saunter out with your 30-something handicap, you can only stand and admire the players who defy the laws of physics and make the whole thing look easy. Sebastian Barry makes writing look easy.

Frank O’Shea is a member of the Tinteán Editorial Team and a contributor to the Irish Echo and Fairfax Press.