No Time For Love by Frank O’Shea

The old couple left home early in the morning to pay their respects. The town was a hilly nine miles away and the pony could scarcely raise a trot any more.

They sat facing each other on opposite sides of the trap on rough cushions made from old potato sacks. Sean wore his best shirt and rough homespun suit; the old woman’s black shawl covered her head and most of her body.

They talked little. They had been married more than forty years and there was little they needed to say: a comment on the weather, praise for this neighbour’s cattle grazing on the roadside or for that family’s neatly whitewashed house. Rarely a word of criticism or blame. If someone neglected their farm or family, you didn’t criticise. It was easy to imagine a dozen reasons why people let things go.

Life had not been easy for them but there were those who were worse off. The old woman had borne him nine sons and three daughters. They were all healthy and were known in the lexicon of the time as good scholars. Each finished school at thirteen and then helped out on the farm until they reached sixteen.

The night before their sixteenth birthday, there was a ball-night in the house: singing and dancing and recitations, a barrel of black porter for the men, port and sherry for the women, tea and barm brack for everyone.

In the morning, Sean took the sixteen-year-old to town as he was taking the old woman now. He put him on the train for Queenstown, from where he would take the next boat to America. Neither Sean nor the old woman ever saw any of their sons again. They had been bred for export, the way the best cattle are today. The oldest one, Jack, was a policeman in New York. He wrote every Christmas, letting those at home know how everybody was getting on.

The old woman was a sister of Mike the Millionaire. He was no millionaire of course, just a man who had gone to America and found his way to California and then to the Yukon. In each place he made and kept some money and then did what was rarely done: he returned to the old country.

He brought back with him knowledge of the outside world, a rare enough commodity in this backward place. He was a natural storyteller and his stories were of a land where to work was to be free, where a strong back and honest hands were a passport to independence and self-respect, where your money could buy land and not simply disappear into a hole that opened twice a year for the benefit of some English landlord.

His youngest sister listened to the stories and dreamed of far places. The dreams remained just that when the matchmaker arranged her marriage with Sean. But as the children grew up, she passed on the dream to them.

Their leaving was inevitable and with each departure she cried; externally and briefly for the neighbours, but inside for much longer. She knew that she was partly responsible for their going but she could not help the dull emptiness in her heart with the overriding pain that none of them ever wrote. She was sure Jack’s Christmas letters were made up, written from duty, not affection. Still, Sean was good to her and there were four children at home – if you could say Paddy was at home – and apart from the shake in her hand, she had good health.

‘I was thinking of Paddy,’ Sean said.

‘He will be all right,’ she replied, marvelling at how their thoughts so often seemed to be in the same direction. Paddy was to get the farm, so when he reached sixteen there was no ball-night. A few years later the Troubles came and he joined the Irish Volunteers.

He was not violent or a tearaway, not even overly patriotic. But when the Black and Tans burned Cork city, he had been one of a number of the local young men who went into the Flying Column. They were the fledgling army of the Irish Republic; in time they would become known as the Irish Republican Army, the IRA.

They would be away for wee

ks, sometimes months, living rough, protected by the hills and the sympathetic peasants. Their tactics were to hit and run. They hid behind fences to ambush military convoys. They stopped trains and removed British personnel for summary treatment. Occasionally, they attacked police barracks in small towns. In a stand-up face-to-face fight, they wouldn’t have a chance. So they used their strengths: knowledge of the terrain, surprise, small mobile units and strict discipline.

The Black and Tans were a byword for terror. Sometimes, word filtered out that it was not all one-sided. There were whispered stories of mutilations and torture.

On one occasion, Paddy came home to the farmhouse with three other lads and an officer. They rested up for a week, moved about among the locals, even helped with the hay. Each night, they were the centre of fireside talk and discussion with the neighbours who were regular visitors to the hospitable hearth. Everyone knew they were in the Flying Column and were theoretically outlaws, but there was never a reference to the fighting or the skirmishes in which they had been involved.

The officer was Dan Connor. He had done his secondary schooling with the Jesuits in Dublin and when the Troubles started he and his brother had assumed the leadership in the local resistance. Still in his early twenties, he had a quiet conviction which Sean greatly admired. During those long fireside discussions, he spoke of Michael Collins and De Valera and the other national leaders as men of vision, but also of practical commonsense. He told of the international swell of opinion which was ready to recognise and help an independent Ireland. He did not talk of England with malice, but with the constant reminder that when all this was over, the two neighbouring countries would have to live in harmony and trust.

On Sunday, Dan Connor and Paddy and the other three volunteers hid their small arms and rifles in a thicket while they went to Mass. The local parish priest was known as one of the few in the diocese who would go against his bishop and give the sacraments to the fighters. At the end of Mass, each shook hands with Sean and thanked him for his hospitality. Then they returned to the hills.

When the Treaty was signed, Dan Connor handed in his arms and asked his men to do the same. Paddy was one of those who refused. Six months later, men who had been comrades through four years against the Black and Tans found themselves on opposite sides in a merciless Civil War.

As Irish killed Irish, the stories of terror were no longer muted. Atrocities on each side – and there were many – were answered with ferocity by the other.

There was a price on Paddy’s head. Sean had been told his son had got out of the country and was with his older brothers in America. He didn’t know whether to believe it or not and said nothing to the old woman. She had her own pain.

Then, two nights ago, Dan Connor and his brother were shot dead in their kitchen, with their stricken mother and father looking on. It was said the men who did it were not in disguise. Nobody would say who they were, though many knew. Sean made some inquiries and was assured that Paddy was not one of the killers.

It was the old woman’s idea that they should meet the parents. There would be no need to discuss anything or to talk about sides. Just parents grieving with parents, this madness forgotten.

‘We’ll have a bite and a sup at Lizzie Flynn’s ,’ Sean said, ‘and I’ll leave the pony with the smith Harrington for an hour.’

The old woman agreed. She was uncomfortable and needed to stretch her legs. Sean would enjoy his pint. The pony made hard work of the Bell Height, the last hill running from the Suspension Bridge to the top of the town.

As they reached the head of the hill, with the town spread out below, they saw two young men move away from a doorway and come towards them. Sean thought he knew one of them. He looked like a man who had been on the run with Paddy, a younger brother maybe. The other was a stranger; not more than eighteen, surely.

‘Hello, Sean. Hello, Missus,’ the older one said. ‘A fine day for travelling. Any word from Paddy?’

‘That’s what I heard too, Sean. And what brings you to town today?’

The old woman looked more closely at the questioner. He was quite friendly. She was sure he was on the same side as Paddy in the civil war. But even in these times, there had to be a reason for rudeness.

‘We were going to pick up a few messages. Maybe offer our sympathy to the Connors.’

‘I think, Sean, you should go home. You don’t need to be in town today.’ There was hardness in the last.

‘Sean, I think you should go home.’ 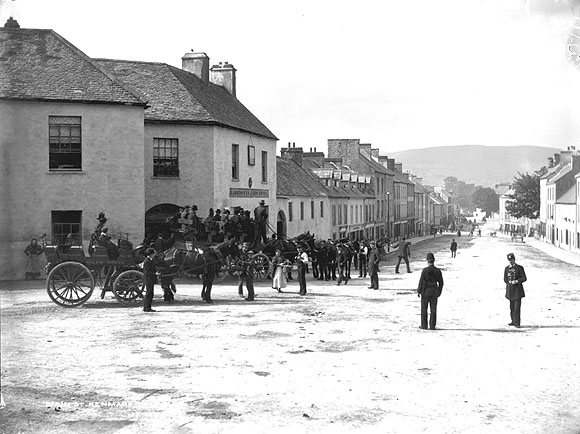 Now there was no doubt. That was an order. Sean thought of the young officer who slept under his roof and spoke of a free Ireland. They had their freedom now and one old couple wouldn’t be allowed to sit in peace with another old couple to share a great grief. Murder wasn’t enough. These guardians of one version of independence would ration even human sympathy.

Slowly, he turned the pony around and headed home.

The story is based on real events; names and some relationships have been changed.

Frank O’Shea is a member of  the Tinteán Editorial Team