As pre-match entertainment for Friday evening’s AFL final, at the St John the Baptist parish’s Aikenhead Hall in Clifton Hill, on the 16th September, Dr VG Noone and Rod Quantock Esq staged a centenary commemoration of Coadjutor Archbishop Daniel Mannix’s first speech against conscription (at Clifton Hill, on 16 September 1916).

Acting as moderator, Val set the scene, including providing the context in which the speech was delivered.  Mannix had availed himself of this opportunity in the course of a brief visit to open the parish fete, which was actually conducted a little further along Queen’s Parade in a hall which later became the local temple of the Masonic Lodge.  It fell to Rod to play the role of Mannix and read his speech. [Quantock confessed to having been raised in the shadow but not within the ambit of St Fidelis’ church in Moreland.]

The commemoration attracted a bumper crowd of old, elderly and middle-aged lefties, many with anti-conscription pedigrees, whose principal role was to respond with generous and even prolonged applause, as indicated in the text of the report of the event in The Advocate of the day and on cue from Rod.

At the conclusion of Rod’s well presented and well received recital, a discussion and Q&A session ensued.  As it transpired, September 1916 was in the middle of a four-year war which had been originally thought likely to be over in six months but which had become a war of such horrendous proportions that ultimately it was dubbed the war to end all wars.  It was not over quickly and the atrocious and accumulating disasters and losses in France in 1916 meant different things to different groups of Australians: to some it reinforced the ongoing futility of war, reopening the debate about whether Australia should have been involved at all and, if so, to what extent; to others it signified a need and intensified the call for reinforcements. As the pool of Australian volunteers had begun to dry, Prime Minister Hughes, ever an avid defender and supporter of the British Empire and of Australia as a key dominion, sought to conscript additional Australian manpower. 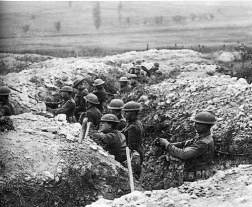 If the Mannix intervention against conscription assisted in galvanising those opposing the call for conscription and even the war itself, did not the reaction to the intervention of a Catholic prelate also galvanise some of those supporting the war and conscription?  While it appropriate and proper to commemorate the bravery and sacrifice of our WWI participants, under the current prevailing political orthodoxy, influenced by the military industry, apparently unlimited resources seem to have been committed to the commemoration and even to the glorification of the events.  In contrast, the significant opposing perspective has not been formally recognised.