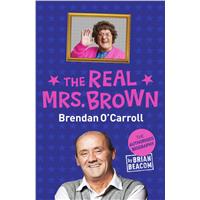 Brendan O’Carroll has an IQ of 156, well above the entry level of 148 for membership of Mensa. To put these numbers in context, it has been estimated that Einstein had an IQ in the 160 – 190 range. So psychologists would no doubt classify O’Carroll as a genius and we are left with the question: what happens to a genius growing up in working class north Dublin who leaves school at the age of 12?

One possible career path is described in this biography of the creator of the Dublin mammy Mrs Brown. There is success of course, accompanied by the trappings of conspicuous prosperity but it is hard not to wonder what he might have been if he had continued his formal education. Instead he became one of the best drinks waiters in Dublin, on one occasion serving a meal to a group of former classmates who had just finished their Leaving Certificate.

There were odd jobs in various places and a few unsuccessful business ventures, but things did not take off until an actress hired for a radio program he had scripted failed to turn up and he took the part himself. The rest, as they say, is showbiz history.

There was no silver in Brendan O’Carroll’s childhood spoon. He was the youngest of eleven children whose mother, following the requirement of the times, had had to give up her teaching job when she married. She used her ‘free time’ to set up an organisation that campaigned against price gouging in the era of shortages after the war. She was elected to the Dáil for the Labour Party and was their chief whip 1954-‘57, subsequently working for Dublin Corporation. There is little doubt that some of her personality appears in Mrs Brown.

O’Carroll has had huge success in Ireland with his plays and internationally with his books. More recently, his television series have been hugely popular. He is unique in that he writes all his own material; moreover, all parts in his productions are played by members of his extended family, a most unusual situation where it is assumed that a production needs a major ‘name’ for promotion.

While the story is a good one, the narrative is undistinguished. It reads like an unconnected series of articles, with lots of quotations from the central character and his friends. Some of the research is shoddy. It was not Des O’Malley who introduced free secondary education, for example, but his uncle Donough. And I greatly doubt that a two-bedroom, unheated corporation house in Finglas would have fetched twenty-one thousand punts in 1977.

In the end, the reader is left with the feeling that this could have been a much better book. Perhaps, the fact that it is an authorised biography means that we are told only what it suits the subject to tell us. There is little analysis, and no real insight into what makes a genius tick.

Frank O’Shea is a regular contributor to Tinteán as well as The Irish Echo and the Fairfax press.